The attraction? 218 flavors of ice cream on site! And those aren’t just variations of chocolate and vanilla. They’ve got flavors like wasabi and tofu.

Visiting the place is an event. You walk in there and it’s packed with people looking at all the different flavors and asking to try some. I reckon there were people just trying flavors and not buying anything—218 spoons of ice-cream would fill anyone.

As for me, I spent 20 minutes trying to decide what to get before settling down for a good old chocolate. I might have walked out without buying too, but I really like chocolate.

Too many choices can sometimes be overwhelming and could lead to lower conversion rates. It seems counter-intuitive. Shouldn’t more product options lead to more sales?

Well, studies have shown that when people are overloaded with options, they tend to go with the safest one. For consumers, the safest choice is to not buy anything. In my case, it seems to be chocolate.

Are you overwhelming customers, and should you be offering fewer options? Let’s find out. 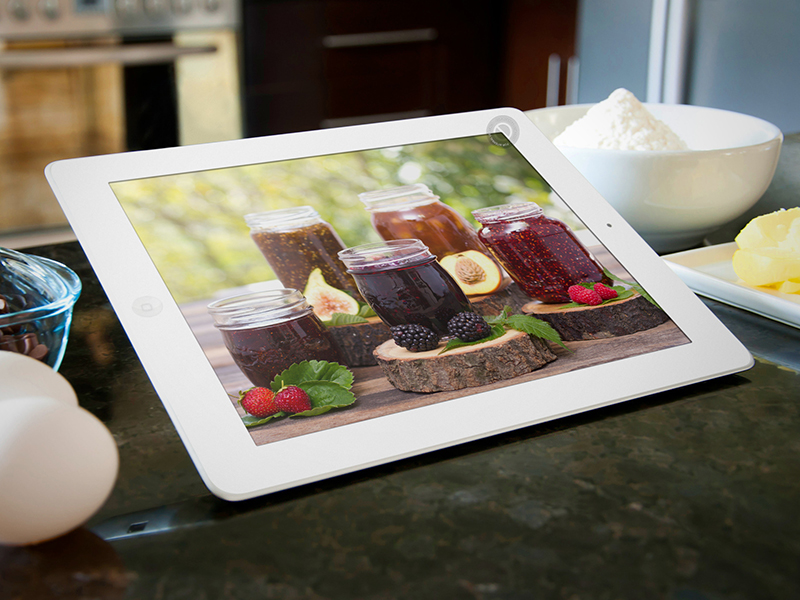 More calls to action don’t necessarily mean more action. Whether it’s your website, landing page or email newsletter, asking customers to do multiple things will only lead to distraction and inaction.

NameOn, a Scandinavian e-tailer, found that the dropout rate between their cart and checkout pages was 31.7%. It was the first step in their checkout funnel and they were already losing a full third of their customers.

They had a good look at the Cart page to determine what the issue was. Their initial design had 9 calls to action, including calls to sign up for the newsletter and like them on Facebook. 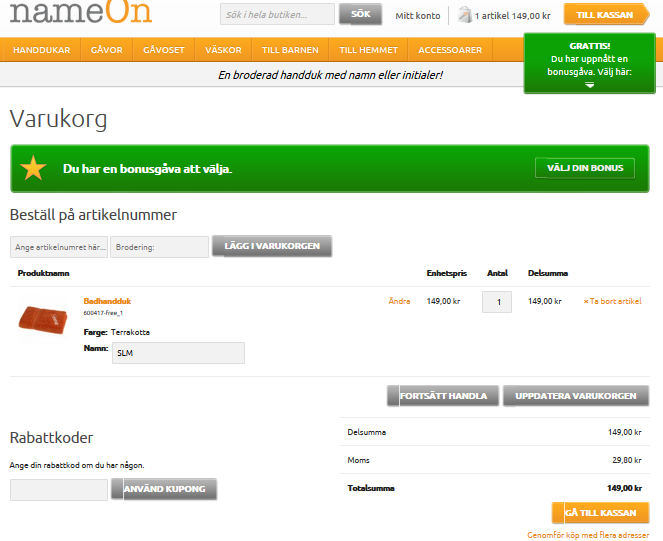 They hypothesized that these extra CTAs were only distracting customers. To test this, they created a simpler variation with only one bold CTA that asked customers to continue to checkout. 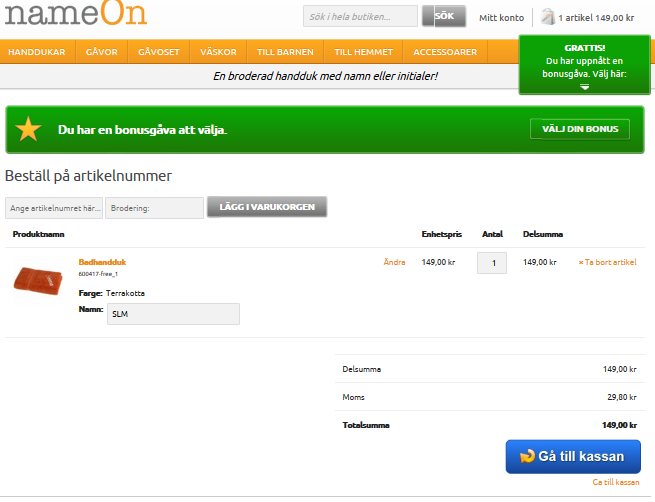 The variation performed better by 11.40% with a 99% statistical significance. Seems like a small number, but it actually translates to over $100,000 extra in sales each year for NameOn.

Now ask yourself this. Are a few extra Facebook likes really worth $100,000 a year?

It’s tempting to present customers with multiple CTAs in the hopes that if they don’t click your primary CTA, they’ll click one of the secondary ones. If even you design your primary CTA to stand out and sit at the top of your hierarchy, you’re still giving customers other exit opportunities.

Whirlpool made the mistake of thinking that more calls to action meant higher click through rates. They had a new campaign coming up for their Ice Kitchen collection and they wanted to offer consumers a rebate.

They initially created an email campaign that had the rebate page as the primary CTA, but also included three other features as secondary CTAs.

In this screenshot, you can see that the rebate CTA is a massive yellow button, while the other three are just ‘Read More’ links. To us marketers, the goal of the email seems obvious.

However, from a consumer’s point of view, those ‘Read more’ links might be more interesting to them, and might take their attention away from the big CTA. To test if this would happen, Whirlpool created a variation with only the primary CTA. 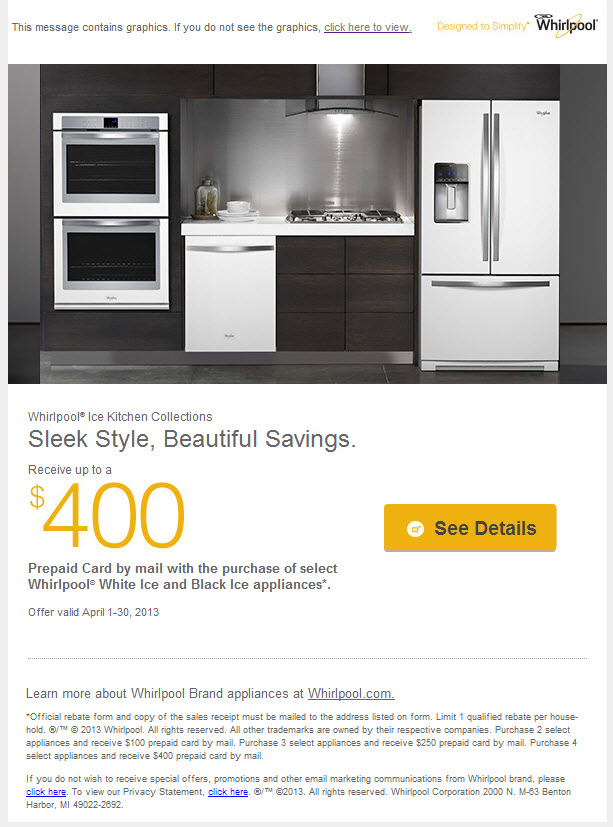 It’s a very simple change, but it made a huge difference. The email with the single CTA had a 42% higher click through rate, proving that less is more.

The concept of fewer CTAs also applies to your promotions. Too often we see retailers sending out emails or creating Web campaigns where multiple items go on sale.

It’s like someone coming up to you and saying, “I’m discounting this item. And this. And this. Oh, and also this. You know what, why don’t you look at this, this and this as well. And while you’re at it, consider this and this, or maybe even this.”

Whoa, hold on there! Which product do you want me to buy?

Indochino conducted a simple test for their email promotions. They sell custom men’s clothing and they found that the best time to promote some of their shirts was just after a customer had bought an expensive suit.

They could have inundated customers with various shirt suggestions in the hopes that they would click on one and buy it. However, they decided to take a simple approach. They picked three shirts that matched the suit and promoted them as a bundle.

The brilliance of the email lies in its simplicity. First of all, it’s highly personalized. Second, they are asking customers to buy, not one, but three more products at a bundled rate. Having just spent thousands of dollars on a suit, customers are unlikely to balk at $200 for three custom shirts.

Finally, there’s only one promotion with one call to action. 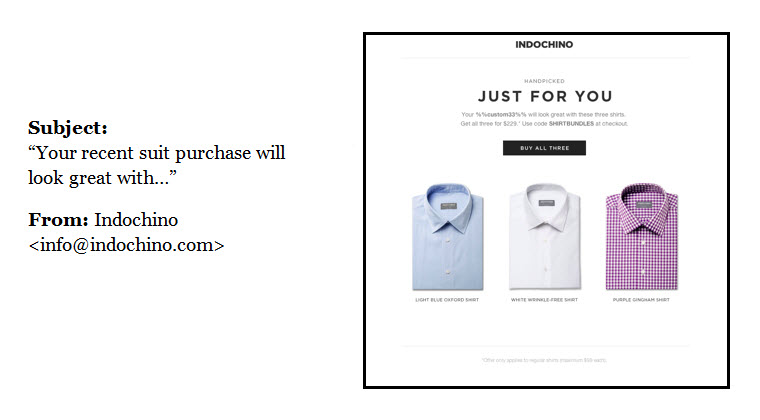 The email resulted in a whopping 540% increase in revenue per email from their regular promotions.

Back in 2000, Sheena Iyengar and Mark Lepper conducted their famous jam experiment. They wanted to test how the number of product variations affected conversion rates, and they used a certain brand of jam as their product.

The experiment took place in an upscale California grocery store on two consecutive Saturdays. Shoppers were presented with a tasting stall, which carried either 24 flavors of jam, or 6 flavors, depending on the time of day.

Clearly, offering numerous product options can attract lots of visitors, but the reality is that the conversion rates are quite low. You want to be careful not to end up like the International Ice Cream Factory, a tourist attraction rather than a business.

Fewer product options also means higher customer satisfaction. In another experiment, Iyengar asked participants to pick out one chocolate from a variety box. She split them up into two groups, one group getting to pick from a box of 30 chocolates, while the other picking from a box of 6.

As a SaaS business, you have only one product anyway, but you still might be offering too many options to customers.

Most apps typically have three pricing tiers—small, medium and big. Some even have a fourth enterprise plan, while others have a smaller free plan.

It’s natural to simply copy the three-tier plan, but if you’re just starting out, it might make more sense to test if this is actually for you. Just because it works for other businesses, doesn’t mean it will help you convert the same way.

Ash Maurya wanted to test out different pricing structures for his photo sharing app. He initially came up with three tiers:

He also wanted to test if it was worth offering multiple pricing plans to customers or just the one. So he created 4 pricing pages and tracked conversion rates as well as retention rates.

The first one, the control, was a single plan option for the $49 price tier.

Then, he added all three tiers to the pricing page.

Ultimately, the conversion rate for the three-tier pricing was the highest, but it also lead to higher churn because more people were signing up for the free plan and then dropping out.

What really mattered was revenue, and the original single price page performed the best. Incidentally, it also had the second highest conversion rate.

When offering multiple price plans, if you have a free plan, you might find many customers just defaulting to that. In that case, it’s worth simplifying your plans and just offering one tier. Customers have only one choice to make and that makes it easier for them.

Mark Zuckerberg recently explained why he wears the same t-shirt every day. He said it was a silly decision to pick a different t-shirt every morning, so he just uses multiple versions of the same one each day.

Every time we make a decision, it takes up some energy. When more choice is offered to a consumer, the decision-making takes longer and requires more energy, eventually driving them to the safest option. On your SaaS site that could be the free plan, and on your ecommerce site that could just be not buying.

Instead, try making it a bit easier for them. Give them fewer choices and fewer options and see if it increases your conversion rates and sales.