LinkedIn is no longer just a business networking site; it’s now also a publishing platform. At one time, only influencers could publish on LinkedIn, but in February, the site opened the facility to even more people, with the results that there are hundreds (maybe thousands) of new posts daily.

Of course, participation in this new channel requires yet more content. That’s more time and energy invested on a relatively untested platform. Is it worth it? Can LinkedIn publishing improve conversions? Let’s see.

Publishing on LinkedIn is a relatively simple affair. You click the pencil icon in the status update window to get the post creation interface. You can add a title, content, images and links and have the option to save a draft, preview your post or hit publish. Everything you write appears in the “posts” section at the top of your profile and will also be listed in Pulse. 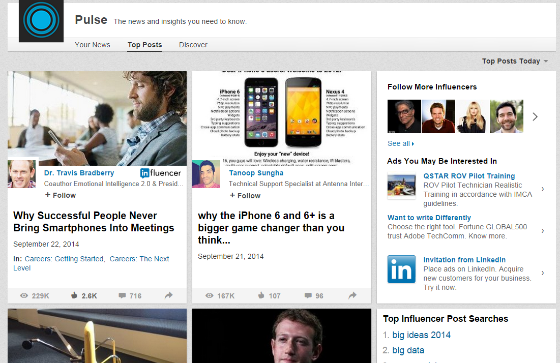 So far, so good, but where’s the payoff? Well, one payoff is the same sort of attention you get from blogging.

We’ve seen the stats before, but a recent case study on the Groove HQ blog reinforces the point that blogging works. The case study highlights Groove’s spend on blog content creation, the number of subscribers they get and, most importantly, the fact that subscribers convert three times more than those who don’t. There are additional benefits in terms of trust, social mentions and expanding the audience by getting posting opportunities on larger blogs.

7 Case Studies on LinkedIn and Conversions

Scoop.it published a study on using LinkedIn for content syndication. Their experiment consisted of publishing essentially the same post with different titles on LinkedIn, Medium, Business2Community and SocialMediaToday. While no platform resulted in the level of attention the post had got when originally published on the blog, the LinkedIn syndication resulted in a huge increase in reads, shares and comments. While they were unable to track LinkedIn conversions directly, the post as a whole did well.

Another study from Great Jakes found that republishing an old post on LinkedIn meant the post got far more traffic than the original post did. That’s because the post was marketed by LinkedIn in two categories. A subsequent post which wasn’t marketed the same way, didn’t get the same traffic. The original experiment generated 74 new followers who could end up being qualified leads. Great Jakes concluded that LinkedIn syndication makes sense because of its potential to drive traffic to a site.

Kyle Denhoff also carried out a content syndication case study. The post published on LinkedIn got far more views than it had on the original blog though the blog converted far better. LinkedIn may have some advantages in reaching your target market. His conclusion? Use both platforms to get attention and convert.

A study on DIDIT shows that one particular article generated 12,000 views, 408 shares and several comments, tweets and Facebook shares. While this was an unusually good performance for the particular author, other articles also did well. The study suggests that LinkedIn articles are also picked up quickly by search engines and syndicated on on high-traffic content sites, resulting in more opportunities for lead generation and conversion. The study warns that while this is excellent, LinkedIn gets the SEO benefit from syndication.

Another study from Come Recommended shows how a sustained LinkedIn blogging program for one of their clients resulted in an average of 88,000 views, 650 shares and 250 comments. If your conversion goal is getting more attention, those are pretty good figures. The company’s approach was to research the topics most likely to engage the audience and write posts suitable for being featured on the LinkedIn homepage. The client’s most successful post got more than 1 million views and was widely shared on other social sites as well.

Ragan.com shows the importance of research to identify the content that does best on LinkedIn. It identifies case studies as a particular favorite (as well as industry news and research) and shows the best days to publish to get the most attention for your content. (Hint: avoid weekends – fewer people do business then.) The study also found that longer content generated more activity.

NewsCred found a winning combination: publishing original content on LinkedIn and using that content to feed Sponsored Updates (one of LinkedIn’s advertising options). A two-month campaign which included nine new posts resulted 288 new followers and 71 new “names” (prospects). This campaign was also cheaper than their previous advertising campaign on another platform, with a significantly better return.

How to Prep for Success with LinkedIn Publishing

While there’s no long term research on LinkedIn publishing, the studies above suggest that there are benefits to using the platform. If you’re going to make the most of it, then following rules about creating engaging blog posts is a good start. That means:

LinkedIn also provides a number of ways to promote the posts you have written. These include sharing them within targeted groups and on your profile or company page (or both), sharing on other social media (if you have linked Twitter to your LinkedIn account, you get the option to share there when you publish) and paid options such as sponsored updates and other ads.

Overall, it can’t hurt to target LinkedIn with a selection of new and repurposed content to increase the attention you get in your target market. Apply the same principles you use to create posts with viral potential and you should see similar attention on LinkedIn.

Finally, though LinkedIn publishing has huge potential as a marketing and branding tool, let’s not forget that LinkedIn owns the platform. As we’ve seen before (remember LinkedIn Answers), LinkedIn can always withdraw a service or change the rules so be sure to keep most of your content on media you actually own.