When it comes to social advertising, most of what you hear about is Facebook. Then a little about LinkedIn. But not much about Twitter. If you want to boost the visibility for your tweets, here are five ways to make it happen plus the pros and cons of each.

As a disclaimer, note that you should use any pay for tweet strategies outside of Twitter’s official advertising platform with caution. If Twitter considers activity on your account spammy, you could have your account suspended or shut down. I’ve tried all mentioned services with no issues, but you just never know.

Promoted Tweets appear in several areas of the Twitter experience starting with the general Twitter stream and search results.

They show up as expanded updates on your profile. 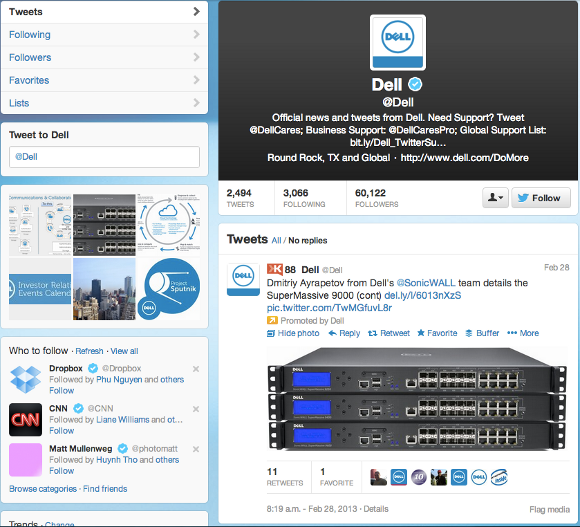 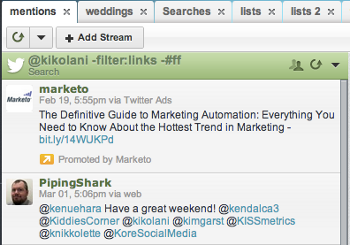 To get started with Promoted Tweets, you will simply need to sign in to Twitter Ads by going to Twitter for Business and clicking on the “Let’s go!” button.

From here, you will first set your target locations. This way your tweets will only be shown in the demographic you have chosen. Next, you will click on the Promoted Tweets tab to set up your tweet. 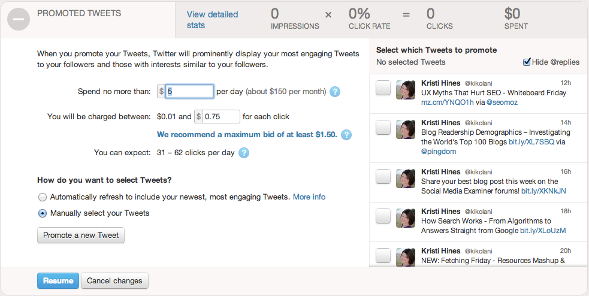 Here, you will set your budget and choose up to five tweets to be promoted. You can also set it up to promote your latest tweets. It’s that easy!

The best part about Promoted Tweets is that because it is part of the Twitter platform, it is promoted all throughout Twitter as well as on select Twitter management tools. This means more exposure for your tweet.

The downside about Promoted Tweets is your lack of advanced targeting options like you would get with Facebook. Twitter automatically targets your Promoted Tweets towards people with information in their bio that matches your account and your tweet. The only way to work with this is to make sure your profile and tweet are keyword optimized to hit your target audience.

Another downside is the speed at which your budget will be exhausted. Depending on your keyword and the size of your target audience, you could easily go through $100 in less than an hour. And since you can’t set a stop date for your tweets, you have to remember to go in and cancel them when you are done with your promotion.

Next on the list of paid Twitter exposure is Sponsored Tweets. This service allows you to pay others to tweet a specific message of your choosing. People who tweet your messages will have mandatory disclosures attached to the tweet such as mentioning it is sponsored or labeling it as an ad. 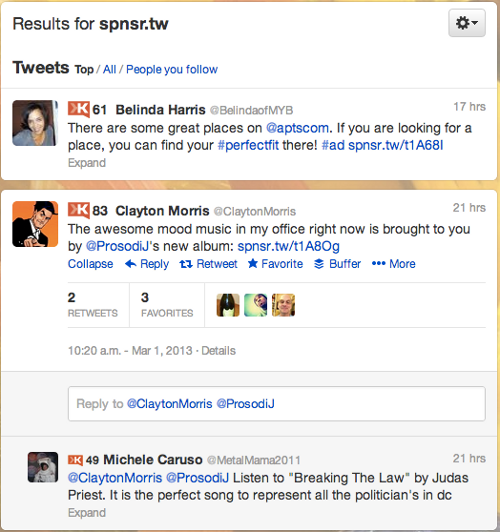 Sponsored Tweets look like the average tweet. The only things you will notice are the disclaimers and the shortened URL (spnsr.tw). Try copy/pasting this URL into your browser address bar:

Simply replace the term ‘keyword’ with the subject of your sponsored tweet to see some people who have sent a sponsored tweet about the topic. Or remove the ‘+keyword’ to see the latest sponsored tweets on any topic. Click the Expand link under tweets to see their engagement (retweets, favorites, and replies) as shown in the above image.

Once you sign up as an advertiser, you will get to enter a tweet into the Sponsored Tweets system. First you will choose whether to pay when someone tweets your message or when someone clicks on the link in a tweeted message. Then you will enter: 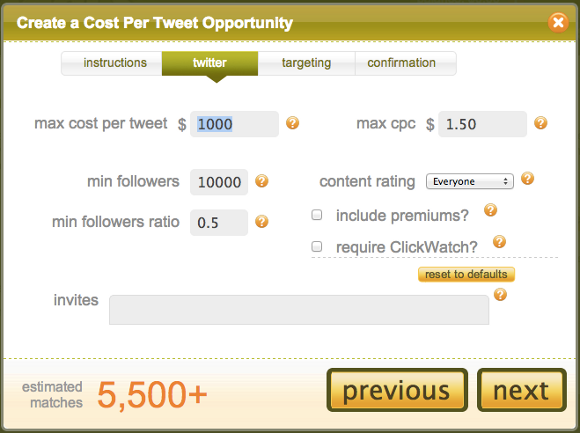 Once you have set up your tweet, you will get to see the potential candidates who match the criteria you specified. In the mix, you’ll find mainstream celebrities, web celebrities, athletes, and authors first, then general users. Next to each person, you’ll see their pricing per tweet, followers, friends (people they follow), ratio of followers to friends, and cost per thousand of followers.

You will select the people you would like to send your tweet. The people will need to approve your message and accept your offer.

The biggest pro in this system is potential exposure with a Twitter celebrity whose audience matches your demographic.

The con? First off, you can’t see the potential tweeters until you sign up and submit a tweet which means you can’t find out if there is anyone you are interested in until you’ve invested some time. Then you can’t sort or filter people (ie. see only athletes if your business is sports related). You also have to click on each user to see their bio. It would be much simpler if they included a bio line beneath each user. While you can tell that a user like @applediscounts will have an Apple fan base, users like @1ganjo are a mystery unless you already know them.

BuySellAds is mostly known as a marketplace for buying and selling display advertising space. But they also have an area where businesses can buy sponsored tweets from users at a per tweet price. 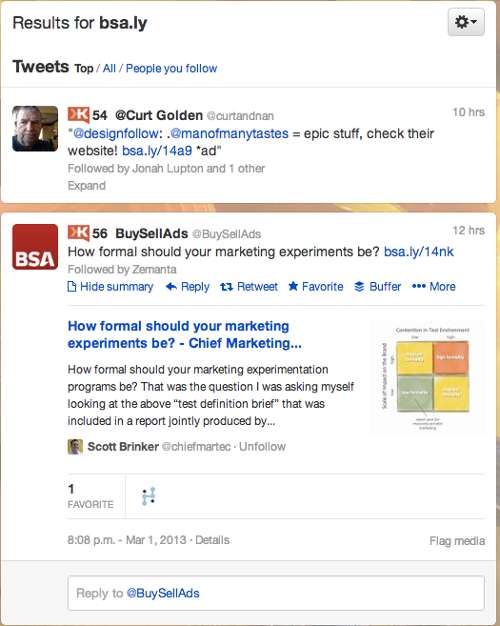 BuySellAds sponsored tweets look like the average tweet with a *ad at the end. You will also see their shortened URL bsa.ly in tweets.

You can search for examples of BuySellAds Sponsored Tweets by copy/pasting the following into your browser,

Simply replace the term ‘keyword’ with the phrase you are interested in or remove the ‘+keyword’ to see all BuySellAds sponsored tweets.

Once you register for an account at BuySellAds, you can go to the tweets tab to browse users who will tweet your message. You can sort people by category using the options on the left side of the screen as shown previously.

Once you have selected a tweeter, you can click on their name, see their bio, and then choose to buy a tweet using the Buy Now button. 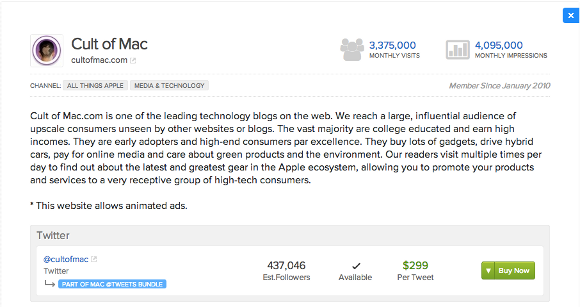 Once you have finished choosing people to tweet your message, you will go to your shopping cart and enter your tweet using the Upload Creative button. 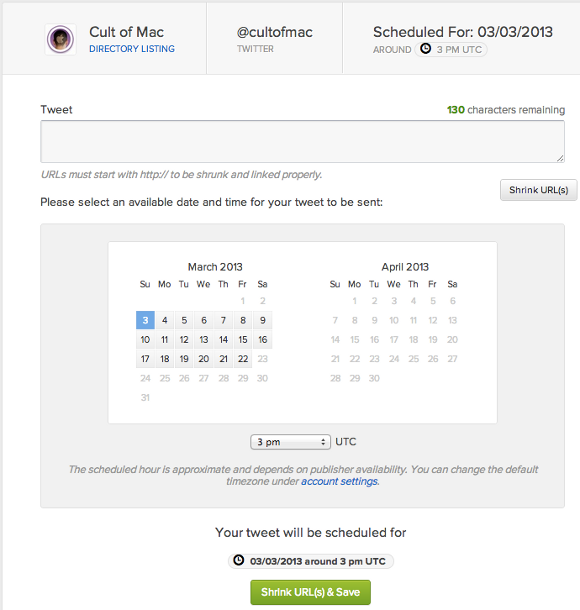 You can schedule tweets to post at specific times when setting them up.

What’s great about the BuySellAds sponsored tweet platform is that you can search for tweeters by category vs. having to check everyone’s bio.

The downside is you have to click on each tweeter individually and enter your tweets per user. This might be exactly what you want if you want to craft a custom message per individual Twitter user.

JustRetweet and EasyRetweet are similar services that allow you to offer credits to members of the communities in exchange for a tweet.

Tweets from these communities look like average tweets. Members are not required to disclose the fact that the tweets are (in a sense) sponsored nor is there a custom URL from either network.

Once you sign up for JustRetweet and/or EasyRetweet using your Twitter login, you will have the option to earn credits by tweeting other members’ messages or buy credits. A business or any Twitter user will have to decide whether their audience would be open to the members’ content that you are tweeting in exchange for credits or can simply buy credits. 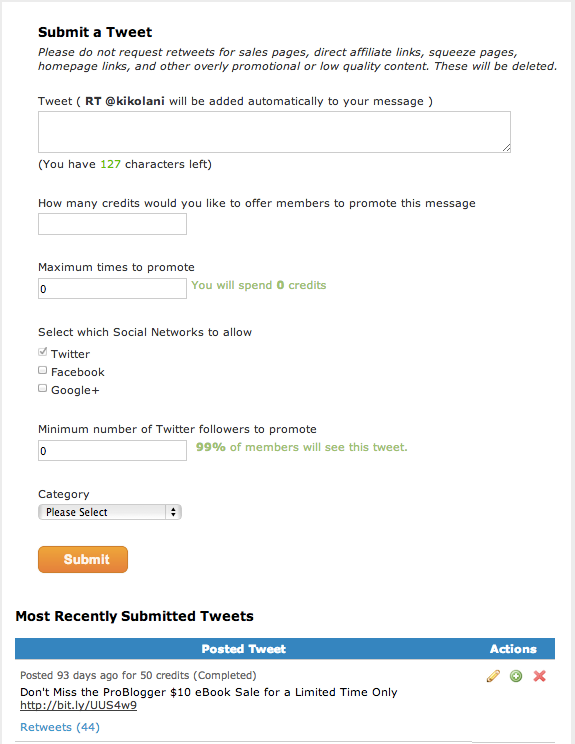 In both systems, you will enter a tweet that you would like others to share. You will then attach a certain number of credits that you will give them in order to tweet it. It’s best to browse through the list of current tweets in the system to see what the going credit rate is for offering a tweet.

The pros about these systems is that you don’t have to choose specific individuals – you can just set a minimum follower count so that only those people will have the ability to tweet your message.

The con about these systems is that since you aren’t choosing specific individuals, anyone could be tweeting your message. With automated follower systems, anyone can collect a large following count and tweet your message so they can earn credits. The result could be low engagement. To prevent this, you may want to browse the members directory to see if there are people who fit your demographic.

Last but not least, there is Fiverr, the marketplace where you can get just about anything for $5 – including tweets.

Fiverr does not have any mandatory disclosure rules or shortened URL structure, so tweets will look average.

Once you have signed up for a Fiverr account, you can use the search box to find people who will tweet your message. A search for tweet or send tweet will suffice. You will then pay $5 to the job that looks most fitting of your needs and follow the individual seller’s instructions.

While there may be quality tweet jobs, in most cases, you will get what you pay for. Fiverr is great if you want to inflate your tweet count to create “social proof” for your business or blog content. For example, you’ll be promised over 2,000 retweets of your message. However, your message could end up on an account that looks like this. 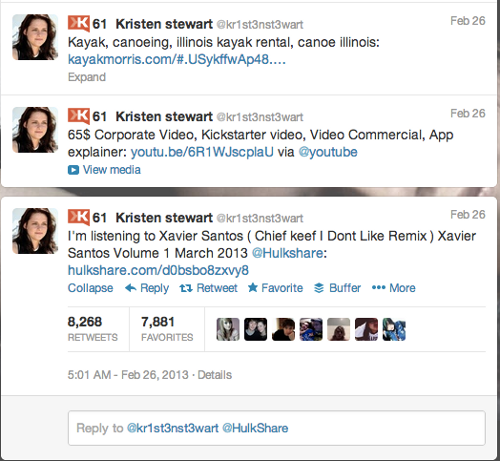 While you will get the tweet count you purchased, they will typically not be from accounts with any kind of influence. Or followers for that matter.

Plus the tweets will all be identical. And sometimes Twitter catches on to these networks of retreaters and will suspend or deactivate their accounts which means you will lose some of your tweets.

There you have it – five ways to promote your tweets for more visibility. Have you tried any of these or other networks? Please share your experience in the comments.