The blog at CrazyEgg got a question from a reader recently, wondering about Facebook hashtags. The reader wanted to know if it was worth using them and, if so, could we shed some light on the topic.

I was curious too, so I did a little research. A quick search for “hashtags on Facebook” brings up a number of articles, including:

Hashtags have been out for almost a whole year on Facebook, and it doesn’t appear that people (or brands) are using them too often. I know I haven’t used them, either personally or professionally, and most of my network has ignored them too.

But what about in marketing? There don’t seem to be a lot of  “Hashtags for Facebook” guides out there though. Hmm, it doesn’t look like any marketing gurus are giving seminars or webinars on the subject either. What gives?

Are hashtags useful on Facebook, or are they dead?

Before we dive into the discussion, let’s quickly go over what hashtags are and where they came from. 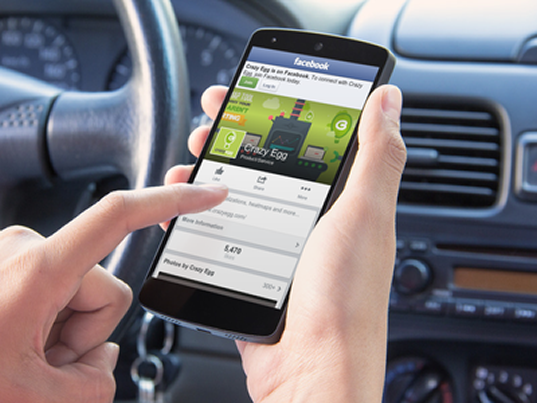 Originally started on Twitter by Chris Messina, they were a way to filter and sort through the massiveness of messages found on Twitter. Essentially, it was a way to filter discussions in a simple way. Click the hashtag to see all tweets from people on that topic. You could find and follow all sorts of new people this way.

Facebook didn’t need to bother with hashtags because users could control what information to see in their News Feed. Think of it this way: On Twitter, it was an active way to seek out information; on Facebook you got the information passively in your News Feed.

Instagram and other social media platforms embraced the idea of the hashtag because they too were platforms where users had to actively seek out the information and users. Google+ and Facebook rely on their platform rules and algorithms to filter the information for you.

Back to the question….

Think about it this way:

When you go to Facebook, you’re probably looking through your News Feed for news on your friends and family. Even if you’ve Liked a brand on the site, the information still comes to you in your News Feed.

You see all the updates and pictures that have been posted by both friends, family, and brands. And then you log out. Can you think of any time that you continued to surf through various pages? Probably not.

You open the app on your mobile phone or tablet, and scroll through your feed. Someone uses a hashtag for one of your favorite TV shows, so you click on it to see who else is talking about it. Maybe the star of the show? The writer? Director? You then lose the next hour as your scroll through all the updates with that hashtag, and maybe even made a new friend who also likes that show.

And there you have it: The reason why using hashtags on Facebook will never catch on (and in fact, hasn’t caught on in the almost full year that they’ve been available.) The platform itself doesn’t lend itself to the notion and practice of hashtags.

No one spends hours on Facebook scrolling through updates based on a hashtag (spending hours playing Candy Crush Saga or Bejeweled Blitz, sure, but reading through messages? Nope.)

Here’s the science to back it up

EdgeRank did a study on hashtags, analyzing more than 500 Pages that posted both with and without hashtags. After looking at 35,000+ posts, they found only 6,000 had hashtags. That’s only 17% of the posts on Facebook.

When they dug deeper into the numbers, they found that hashtags didn’t have a positive impact on the brand’s engagement levels on Facebook. 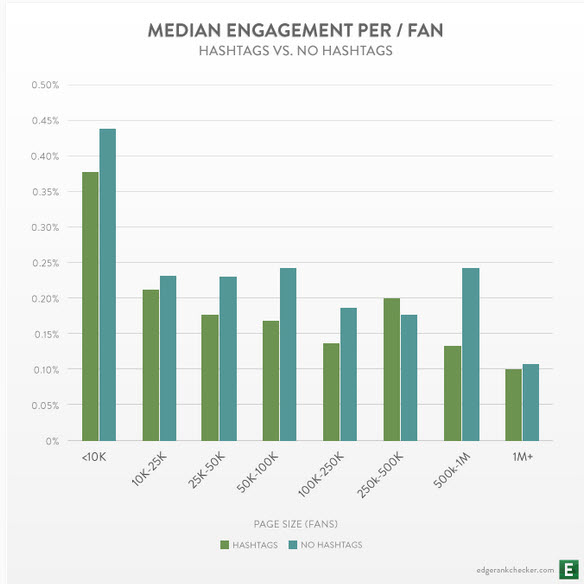 Compare that to Twitter, where EdgeRank found that using a hashtag typically doubled the chances of a message being retweeted. More than 70% of the Fortune 500 brands they looked at experienced an increase in retweets when they used a hashtag. Seventy percent!

It appears, then, that hashtags aren’t really gaining a foothold on the social media user; however, if you’re still looking to use them in your marketing campaigns, here are some tips to make sure you’re getting a good return on investment on them.

Facebook Insights  is the administration panel for Page owners on Facebook. When you put a hashtag in a post, make sure to check out your Reach and Engagement numbers for those posts to see if the hashtags are making a difference.

This will save you time in your social media campaigns, especially if you’re using a tool that publishes to multiple platforms at once, like Hootsuite.

Tip#4-Research your hashtag before using it

No sense in using a hashtag all by yourself, right? You want people to share it, and also avoid the embarrassing problem of using one that’s been used for an entirely different purpose and doesn’t align with your company message.

Facebook doesn’t limit your posts by character, so you can type away to your heart’s content. Likewise, you can add as many hashtags as you want to a Facebook update. However, it’s not recommended since it’s a red flag to both Facebook and users.

SocialBakers took a snapshot of hashtag usage on Facebook earlier this year and found that the majority use less than five hashtags per update, with the highest number being in the 1-3 range.

After reading all this, and you’re still keen to use hashtags on Facebook, go right ahead. Just don’t say we didn’t warn you.