When you think of Facebook, the word “e-commerce” doesn’t generally come to mind.

What if you could engage your customers on Facebook, not just on a social level, but on a shopping one too?

The good news is that there are plenty of high quality, tightly-integrated Facebook ecommerce apps that can bring the ease of use and customizability of an online storefront to your Facebook page. 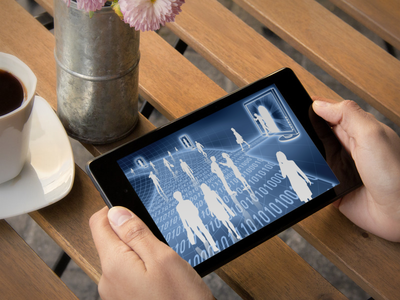 Many of the solutions below also work with existing stores created through virtual storefronts like Shopify and Magento, so there’s no need to re-upload your inventory and slog through all that work again. Here are seven of our favorite Facebook eCommerce apps, along with pricing, reviews and more. 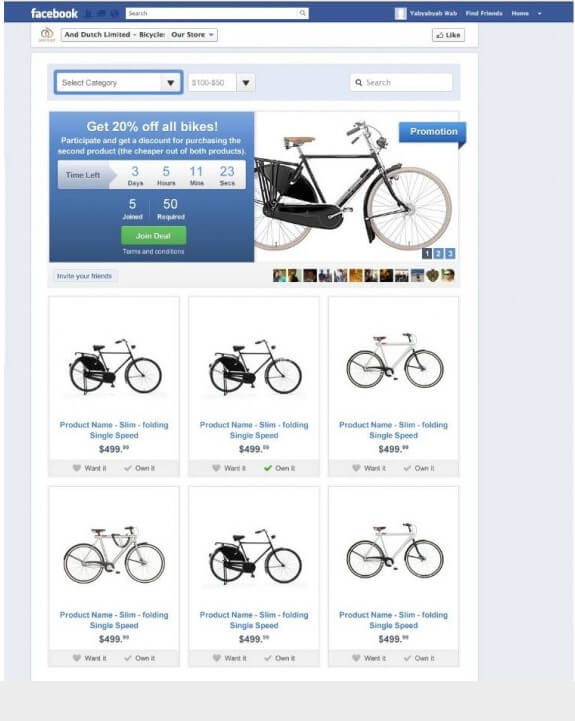 StoreYa is well-known for its integration with Magento, a popular e-commerce platform. But what you may not know is that it also works with a number of other popular selling sites, including eBay, Etsy, Amazon, and WordPress (through WooCommerce). That means if you already have an online store set up through one of these providers, importing it to Facebook through StoreYa is just a matter of a couple clicks.

But that’s only the beginning. Where StoreYa really shines is its e-commerce marketing tools. By using their service as a storefront provider, you can access a variety of social shopping features including a coupon pop-up to reward fans for browsing your Facebook store, a Groupon-style group buying deal, a “scratch and win” coupon game and more.

StoreYa’s free plan only lets you have access to the coupon pop-up feature, which, for many small businesses looking to sell online, is plenty to start with. Premium plans start as low as $9.99/month for 500 SKUs, up to $69.99/month for 10,000 SKUs.

Overall, StoreYa’s ease of use and seamless integration with existing seller platforms make it easy to open up your store to the e-commerce potential of Facebook. It’s well worth a look whether you’re just starting out, or you have an established store with another merchant. 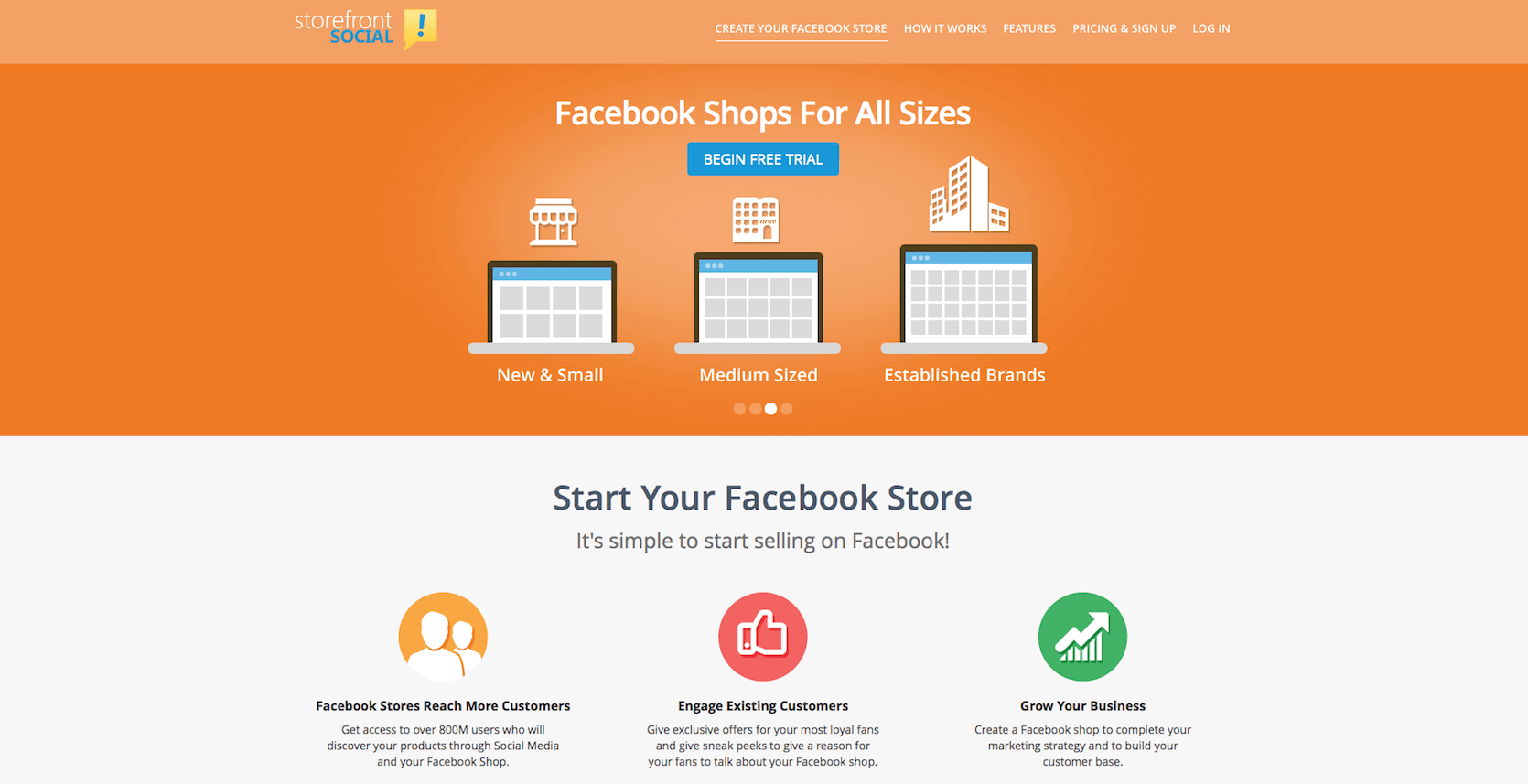 Storefront Social is a Facebook store application that works for new businesses as well as well-established brands. Like StoreYa, it integrates with over two dozen providers. Storefront Social also works with popular self hosted shopping cart solutions such as X-Cart, 3D Cart and OS Commerce. Pricing ranges from $9.95/month for up to 100 products, to $29.95/month for up to 1,000 products. There’s a 7 day free trial.

Although Storefront Social doesn’t have the marketing features that other Facebook e-commerce apps have, it makes up for that with its connection and capability options. For example, storefronts created with the app can easily connect to Twitter, Google+ and Pinterest. It also works with international currencies and languages, and interfaces with Google Base Feed and Yahoo Commerce Central as well as CSV imports.

Perhaps the icing on the cake is that stores created with the Storefront Social app are also mobile friendly—a must-have when you’re trying to win over shoppers on Facebook.

As one of the largest Facebook e-commerce apps, Ecwid’s popularity stems from its robust free plan, which lets business owners add up to 10 products. Because there are no setup or per-transaction fees, this is one of the fastest ways to start selling on Facebook if you only have a few items. Other plan tiers, ranging from $12.50/month up to $82.50/month provide varying levels of products (up to unlimited).

All pricing tiers allow for the selling of digital goods (eBooks, courses, etc.) but higher priced plans also include the ability to offer coupons, as well as manage your Facebook storefront from an iPhone app. The $29.50 and $82.50/month plans also include the option of wholesale pricing groups and product comparisons

The product itself works with a wide range of existing merchant and content management systems, including WordPress, Joomla, and even plain HTML sites. It also integrates with a variety of shipping carriers including UPS, DHL, FedEx, USPS, Australia Post, Canada Post and others.

All of Ecwid’s Facebook stores are hosted on Amazon S3, which is a digital storage network. This gives them the ability to offer unlimited bandwidth, similar to a web host—except much, much faster. Using cloud-based technology, an Ecwid storefront will load fast by choosing a data center near the user’s location. All of this is done behind-the-scenes, so as the merchant, you only need to click, upload and go. 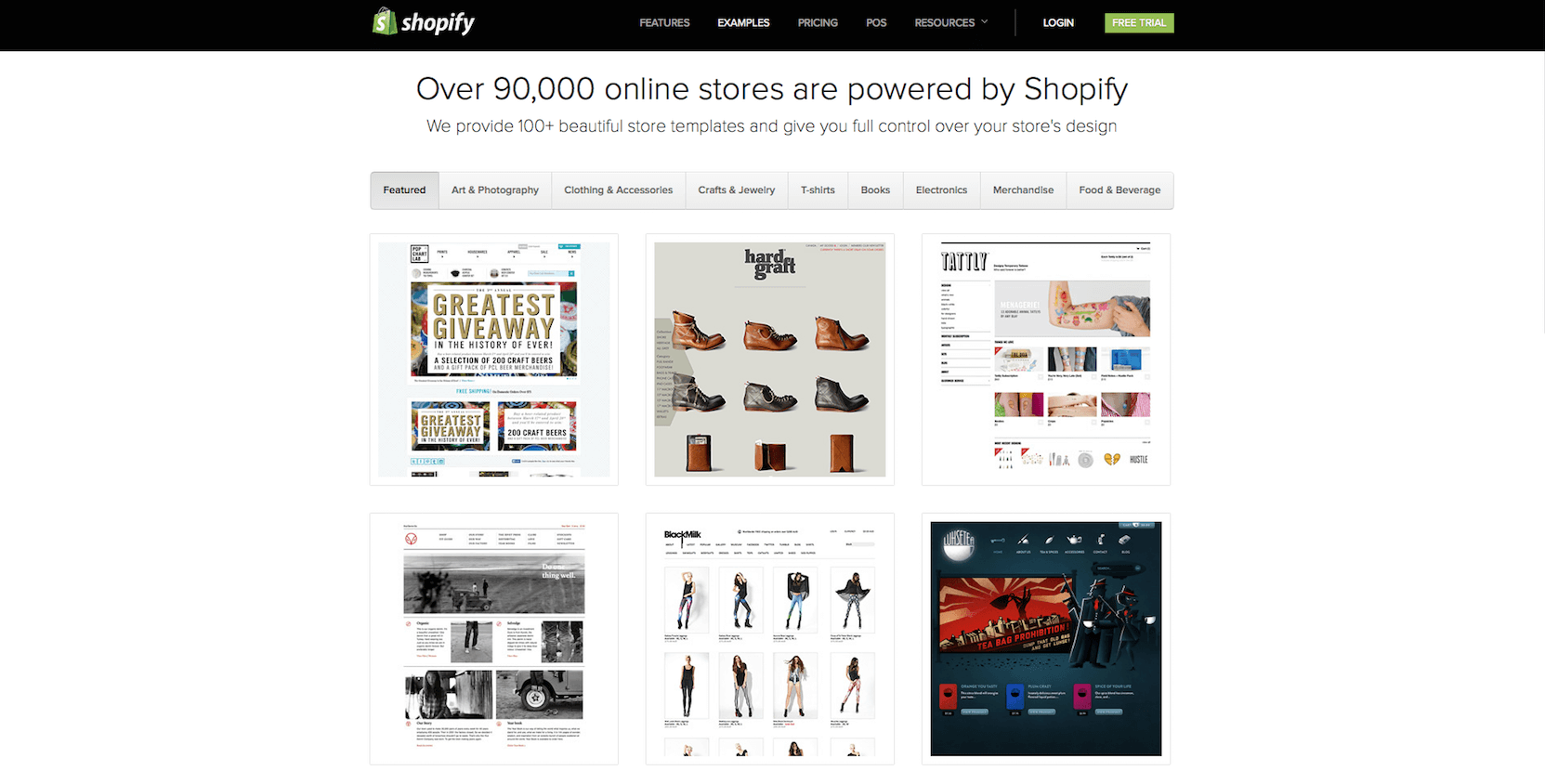 Although not a Facebook store in the traditional sense, as many of the other Facebook e-commerce apps profiled here, Shopify stands out for its user-friendliness and integration abilities, of which Facebook is a part.

Shopify also incorporates many other features that other providers don’t, such as a free card reader, unlimited products (on any plan), and the ability to add discount codes at checkout. Higher tiered plans provide excellent conversion optimization features such as shopping cart abandonment recovery, an option which would typically require another third party service to integrate.

As its main push is being a digital storefront, Shopify’s Facebook integration (and many other features) come in the form of apps. These range from free to paid, and many of them are created by other sites and services which “plug in” to Shopify.

Essentially, this means that you can “accessorize” your Shopified Facebook store with things like competitions, coupons, “Want” buttons, reviews and even a full-fledged customer help desk.

Despite the dozens of apps available for Shopify, it’s a good idea not to get too carried away and keep your focus on the core job of increasing fan engagement and encouraging discussion and feedback among your customers. Remember, shopping comes secondary on social networks.

ShopTab, used by well-known corporations including Coca-Cola, Fiji Water and Sensa weight loss, is named for the previous layout on Facebook, which used tabs to connect users with various sections on the site.

Despite the fact that tabs are a thing of the past, ShopTab has evolved to be a user-friendly, simply integrated solution that gives users the ability to customize a great deal of their Facebook shop.

For instance, you can choose the number of products to display on your shop’s home page, force customers to “Like” your page before they can browse (known as a “like gate”), enable Facebook mobile shopping and work with international currencies and languages.

Three pricing tiers (at $10/month, $15/month and $20/month respectively) let you add a wealth of products—up to 500, 1,000 and 5,000 for each of the plans. The more advanced plan options give you greater customization and flexibility through CSS, the ability to schedule product feeds, the ability to white label the app, and the ability to run multiple shops from a single dashboard.

At a price of $10/month, ShopTab is the ideal choice for stores with a large inventory of products, or anyone who wants a clean, simple and attractive Facebook shop without breaking the bank.

Although smaller than some of its more popular counterparts, Vendevor is nevertheless a strong contender for a high quality Facebook e-commerce store provider. Using their hosted application and credit card processing, it takes just minutes to set up an online store, and then integrate it with Facebook.

Because they also offer credit card processing and a bank transfer option, Vendevor can also work as an alternative to Paypal for those merchants who cannot accept Paypal payments.

The service does have its limitations, however. For example, you can only add three variations per product. In addition, enabling coupon codes isn’t available until you buy the $29/month pro plan—something that many other Facebook e-commerce apps offer for free or a for lower price.

Still, if you want something that’s easy to set up and ready in minutes, Vendevor is happy to oblige. Even if you want to sell from your own site using a hosted solution, or you don’t have a site, you can still use their services by pasting in a few lines of code or setting up a subdomain (i.e. “yourstore.vendevor.com) 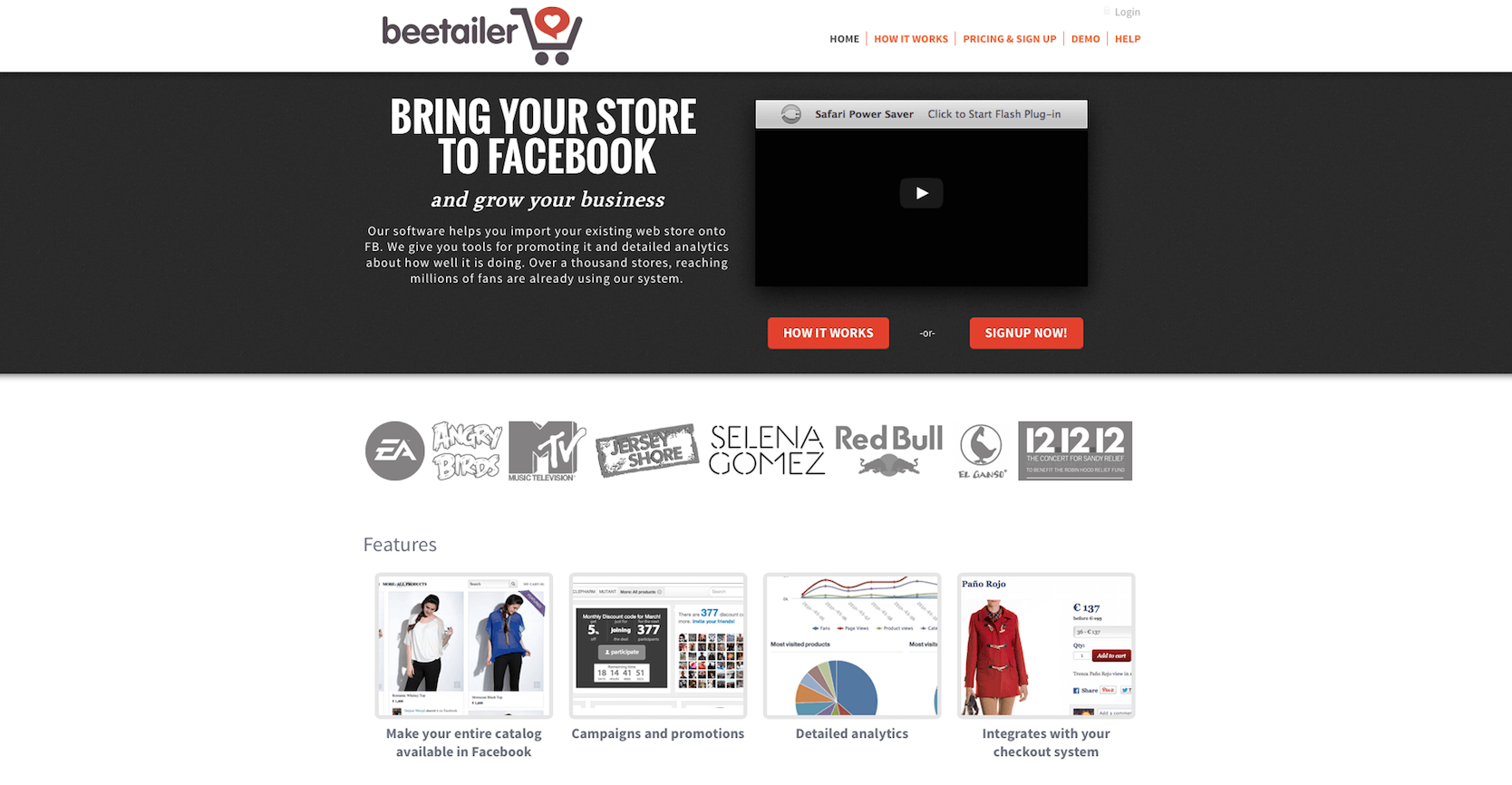 Although Beetailer doesn’t support as many platforms as some of the other Facebook shop services (it’s currently limited to Magento, MagentoGo, Amazon, Shopify and Prestashop), what it does, it does extremely well.

Beetailer blurs the lines between social and shopping by not just bringing your store to Facebook, but also bringing Facebook to your store. It does this by giving you the option of integrating your customers’ Facebook comments into your existing web store.

Users can also become fans by sharing their purchases on Twitter, bridging the gap between Facebook, commerce and other social networks. There are a variety of marketing tools built-in to Beetailer’s cloud-hosted system, which make it easy to schedule product listings, updates and sales.

A free option is available for up to 30 products. A premium account at $80/month removes the “Powered by Beetailer” link and lets you add up to 2,000 products in up to 5 stores. Optional services let you hire Beetailer’s developers to customize your store for you—a bonus if you dread mucking around in code.

Finally, Beetailer’s Custom Store option (currently in beta) looks like a promising way to add native shop functionality to Facebook—even if you don’t have a website or an online store using any of the aforementioned platforms.

Before You Make Your Decision…

There’s no definitive answer as to the “best Facebook shopping cart” or the “best Facebook e-commerce app.” Each one has its own pros and cons. At the very least, you’ll want to choose a social storefront that gives you the option of importing or carrying over your existing store’s feed to save you the hassle of manually re-entering product details.

You’ll also want to choose a package that gives you detailed Facebook e-commerce analytics, since you’ll want to know precisely how your store is performing with your audience.

But from that point on, you’ll need to ask yourself some questions to better understand your needs and requirements.

Choosing the right Facebook e-commerce app for your business is not a decision you should make lightly. After all, the solution you choose will have a direct impact on your revenues, return on investment and conversion rates. It can also have the ripple effect of leaving your customers satisfied and enthusiastic, or frustrated and annoyed.

Take the time to make a “shortlist” of potential front-runners and then take their free trials for a spin. This will give you the best possible reflection of what it’s like to be a “real customer” of the service.

And finally, don’t hesitate to take advantage of all available support avenues—their timeliness, knowledge and attentiveness to your needs are what’s truly going to separate the winners from the losers.

Have you used one of these Facebook store providers? What did you think of them? Still not sure if selling on Facebook is a good idea? We want to hear from you! Share your feedback below in the comments and tell us about your experience.