Since its humble beginnings in 2002 with the launch of the TinyURL service, the URL shortener has evolved to become more than just a convenient way to save characters and trim unsightly web addresses.

These days, the best URL shorteners come with a full suite of analytics tools so that you can not only redirect users via a more memorable address, but also track where your traffic is coming from and what they’re doing once they get there.

In this article, we’ll take a closer look at some of the most-used URL shortener analytics and find out which ones live up to the test.

Recently the victim of a firestorm of controversy over its redesign, Bitly, one of the most popular URL shorteners (originally thanks to Twitter) is backpedaling to address its users’ concerns and keep things simple – the way they started.

Focusing on ease of use, Bitly has added several features that allow users to save, customize and update their shortened links to be public and private.

Currently, Bitly only tracks the number of clicks your shortened link gets – not pageviews or any other data beyond referrer and location: 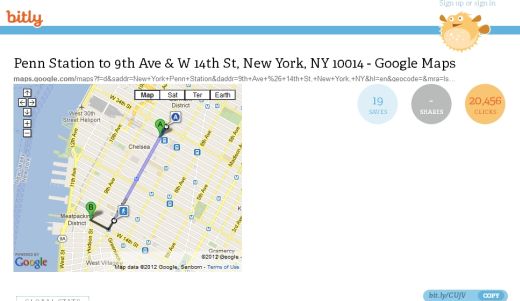 For simple, straightforward analytics distilled into an at-a-glance format,
it’s hard to beat the popularity and user-friendliness of Bitly.

An enterprise (“Pro”) service is also available, however the blog hasn’t been updated since October 2011 (announcing the Beta launch) and things are eerily quiet on the website.

Bitly may be the  reigning champ of URL shorteners in the Twitterverse (before t.co was launched last year), but Goo.gl has analytics covered.

Like many of its services, if you have a Google account, you can track much more information than Bitly offers through its service, including clicks, referrers (and their relationship to each other), browsers, computer platforms and geographic locations. You can even see which time period brought the most clicks (although there is a 2 hour delay) and get a QR code for the shortened URL.

Keep in mind that all your analytics data for shortened goo.gl URLs is public. To access your analytics for a particular URL, just add .info after it, such as http://goo.gl/l6MS.info.

Rather than being yet another cool URL shortener, awe.sm takes things a step further by concentrating exclusively on social analytics.  With its platform, you can not only track the number of clicks, referrals and other assorted information – but you can see which of those clicks drove conversions according to goals you set in the Awe.sm dashboard. 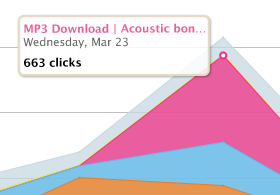 Awe.sm’s social analytics gives you a variety of ways to track
social engagement through their URL shortener

Techcrunch illustrated the potential of awe.sm by examining one of their users, StockTwits (a service which provides real-time updates on stocks through Twitter.

According to the Techcrunch article, StockTwits uses awe.sm to…

“track how its users react to things like quarterly earnings reports for public companies. Awe.sm can look at any link that contains its tracking code in any tweet or other mention of a company produced by StockTwits users, auto-detecting the link and letting StockTwits track all of the metadata around who is doing sharing and when it happens. StockTwits can then use this data to generate more sophisticated data around reach and engagement for how word spreads out among users, and alter its product accordingly.”

Awe.sm isn’t free like Bitly or Goo.gl, but there is a 30 day trial. Prices start at $15/month per user for one project.

Are URL Shorteners Right for You?

After Twitter introduced default URL wrapping with its own t.co service, many SEO providers have found that using a URL shortener for the sake of just a shorter link doesn’t make much sense – especially when a direct link is viewed as being more trustworthy.   The trust issue rears its ugly head when scammers use URL shorteners to hide spyware or other scummy sites.

But when your direct link is simply too long and cumbersome to remember, and you want a quick, direct way of getting measurable results from your social campaigns – URL shorteners and analytics bundle the best of both worlds.

All of the aforementioned URL shorteners have their own approach to analytics.  Your decision will depend on what type of information you need – whether it’s simple clicks and referrers or more in-depth social sharing statistics.

Overall, you can expect that the best URL shorteners will continue their gradual shift to becoming more of a social analytics platform rather than a service to promote a more memorable URL.

Do You Use a URL Shortener?

Which services have you tried? Do you have a service I’ve missed? Tell me about it in the comments below: