With the explosion of mobile marketing in the last few years, the race is on to interact with customers in a way that’s not only non-intrusive, but also welcomed and appreciated.

There are plenty of case studies and examples of mobile marketing success – ranging from apps to websites.  But there’s another seldom-mentioned aspect of mobile promotion that can be used to successfully increase conversion rates:  text messaging.

Of course, how you approach texts to customers will determine whether or not your brand is perceived as a helpful guide or a major annoyance – and either way, word travels fast on the social web.

With this in mind, here’s how to use text messaging, not only to recruit a legion of happy fans and followers, but also to send your website conversion rates soaring.

Currently, text messages have as much as a 97% open rate, compared to as low as 15% for email.

That said, it’s worth noting that texting someone before starting to speak with and build a relationship with them results not only in a negative conversion rate, but also significantly lowers the chance of ever being able to convert that prospect again, according to a recent study by Leads360: 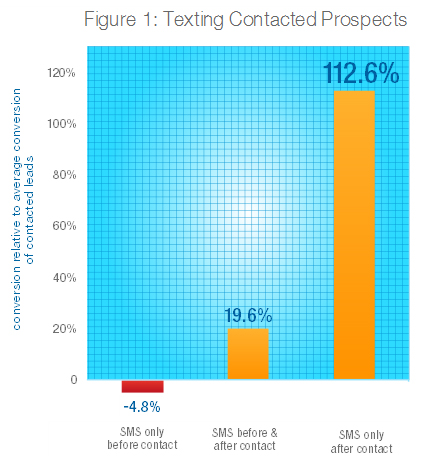 Texting a prospect after initial contact increased conversion rates by 112.6%

Texting both before and after contact has been made does increase conversion rates considerably, but even then the percentage is still close to typical email open rates across different industries.

However, sending text messages only after contact had been established provided the greatest conversion rate increase – as high as 112.6%.

This demonstrates that not only is texting a prospect an earned privilege, but also that trust and communication in the mobile age is very much a two-way street.

How Many is Too Many?

You may be surprised to learn that the “sweet spot” for how many texts increased conversion rates was not just one or two, but as many as three or more – resulting in as much as a 328% increase in conversions.

But beyond just throwing around numbers, it’s important to realize that each one of these text messages has some type of value in it for the consumer.

Just blasting them with irrelevant offers and hoping some of them stick won’t work.

People value their time and many of them are paying for the luxury of sending and receiving a set number of texts each month.  Making each message count is just as important with texting as it is with email (if not more so because of the cost).

Adding Value with Every Message

The good news is that there are many text messaging services that cater to all companies, large and small. They can help you encourage SMS opt-ins and provide customers with valuable offers that match their needs.  Some of the most popular include:

SimpleTexting – Allows you to create a custom plan based on the number of subscribers and messages you want to send.  You can start for free with one custom keyword and unlimited subscribers.  A paid account gets you a vanity shortcode number and unlimited keywords so that you can craft an announcement such as “Text the word COUPON to 885588” for 25% off until April 25th.

TellMyCell – This text messaging/marketing service offers both monthly plans and pay-as-you-go options, managed with credits.  You can also sort subscribers into groups based on what offer they opted in under, and you can also optionally add them to Facebook and other social networks, so that they only see selected offers you provide.

Signal – Provides SMS services as well as social publishing and social monitoring built in. Packages start at $10 per month and include analytics to determine how well your campaigns are performing. Currently only available in the U.S. and Canada.

Fanminder – Combines social and mobile marketing using landing page themes,  real-time analytics and viral sharing.  Free for up to 50 mobile phone numbers or 100 email addresses. You can also import your existing list. But as of yet, there is no way to segment opted-in users into certain groups. Unlimited numbers and emails are priced at $30/month.

Text messaging to increase conversion rates may be a new method of measuring an existing strategy, but just because the promotional channels are different, doesn’t mean best marketing practices go up in flames.

Remember to build a relationship with customers first and provide them with something of value. In return, over time, you’ll build customer loyalty and stronger credibility.

Have you tried texting your customers with relevant offers?  Share your triumphs (or mistakes you’ve learned from!) in the comments below.