Conversion rate optimization. Once you have a sales funnel up and running, conventional wisdom goes that the name of the game is optimization.

But when you’re at the beginning of the CRO process, how do you know what to test first?

Well, most people go for the easy targets:

But most people overlook something critical when it comes to landing pages in particular, which is the way they ask people to opt-in.

Even if your headline, your copy, and your design are all on point, you might still be losing a significant percentage of your prospects because the action that you’re asking them to take (putting in a name and email address), is actually too threatening.

And even though they might be interested in what you’re offering, and the solution, asking for their name and email has set off warning signals in their brain.

It triggers a whole cascade of thoughts and fears, such as, “What does he need my email for? What if this is a scam? Is my information safe?” And when this fear response is triggered, it automatically shuts down the part of the brain that’s open to opportunities and change.

This happens in a split second, usually without your prospect being fully conscious of it. It’s an instinctive reaction that our brain has to a perceived threat.

Now, I’ll share the technique that I developed to get around this (and more than double my opt-in rate in one specific instance) in a moment, but first I want to explain a bit more about the science behind this phenomenon.

You’ve probably heard the metaphor about the frog in boiling water, right?

Put a frog in a pot of cold water and then slowly turn the temperature up, one degree at a time. The frog never realizes the threat, because it’s happening so gradually, and by the time the water is boiling, it’s too late for the poor frog.

As human beings, we have survival mechanisms that have enabled us to continue to exist as a species. One of the most powerful ones is the fight or flight response, which is controlled by the part of your brain called the amygdala.

But, just like the frog in boiling water, when changes happen gradually, step by incremental step, we can avoid triggering this fight or flight mechanism.

There’s actually a great book that’s been very influential for me called One Small Step Can Change your Life: the Kaizen Way by Robert Maurer, PhD, which describes in detail the science behind this process, and how to use the psychology of small steps to make big changes in your life.

Here’s the challenge: Your brain is trained to treat any new opportunity as a threat, which triggers the fight or flight response in your brain…which simultaneously slows down or stops rational and creative thinking.

That means that any new opportunity or challenge triggers some degree of fear, and instead of rational thinking and seeing the potential for growth, the fear takes over.

But there is a “stealth solution” to getting around this

One of the techniques Maurer suggests in the book is “Ask small questions,” and you can leverage this concept in your marketing to get people to take action.

Our brains love questions. We also love the concept of self-discovery. Combine the two and you can instantly see why all the quizzes out there like “Which Game of Thrones Character are You” are so incredibly popular.

So if you can find a way to engage your prospects with small questions, you can gradually “turn up the heat” without triggering their fear response.

The only exception to this is when the questions are too big. So when you ask, right off the bat, for someone’s name and email…well, that’s too big a question.

I saw this evolve with my RocketMemory™ business. First, we had a landing page that looked like this:

We asked them to click to get their Free Memory Tool Kit, which opened an opt-in form that looked like this:

And the opt-in rate on this was about 5%. 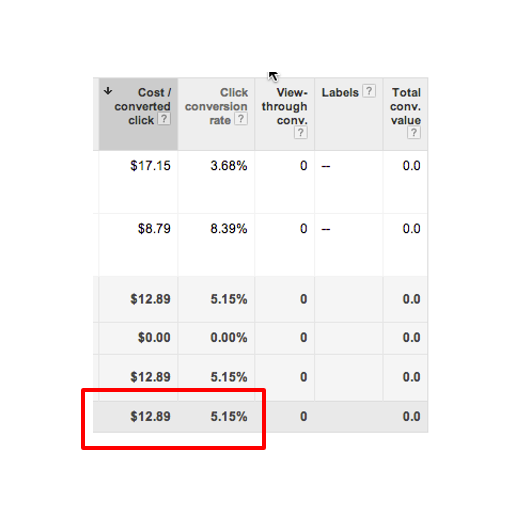 Then, I realized that we could break up the questions into smaller steps. The smaller the steps, the greater the response rate, because the prospects weren’t feeling instantly threatened. Instead, their brains were engaged by the questions and they became curious.

So instead of having a traditional opt-in form asking for a name and email and offering an incentive, here are the 5 steps that a prospect goes through when they land on a “Self-Discovery Landing Page”:

The offer is presented in such a way that it teases the prospect’s curiosity and plays on their need for self-discovery. Curiosity is a powerful tool. Our brains can’t help but satisfy curiosity, which is why clickbait headlines are so irresistible.

So the key is to get people curious enough so that they move on to step 2.

This step is pretty straightforward. Once they click, they get a pop-up question that looks like this:

The first question that you ask needs to be easy, nonthreatening, and simple, to avoid triggering their fight or flight response like the question above.

Most of the time (in markets where this is appropriate and makes sense) I like to ask, “Are you a man or a woman?” because it doesn’t take much thought, and there’s usually one clear answer. But that first click takes them deeper and deeper, slowly warming up the water until you ask them the important questions.

This is where you ask them the question(s) that will place them into a “bucket” and give them a customized offer based on their responses like this: 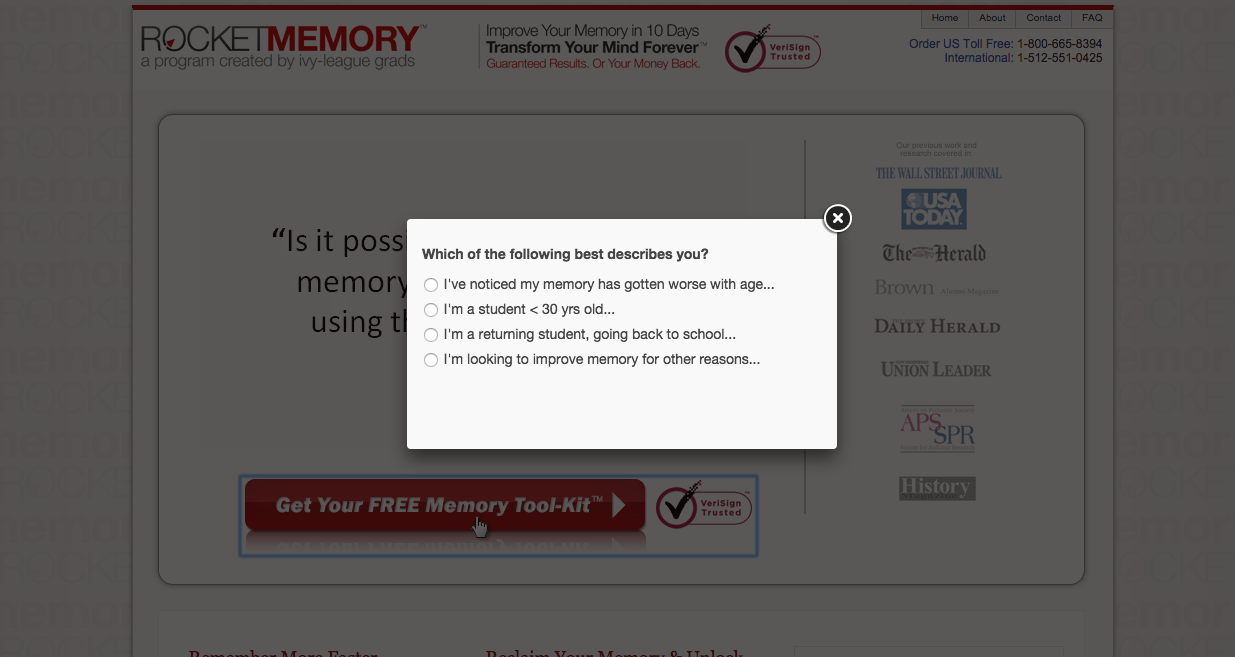 This is relatively involved process within Ask formula, and one in which I go into detail in my book Ask, which you can learn more about here.

When they finish the quiz, they see a form that prompts them to enter their name and email to see their quiz results.

By the time you get to this point, your prospect is hooked. Not only do they have less resistance to entering a name and email, because they’ve already taken a series of actions, but they’re also curious to know the results of the quiz.

Do you see how each of these steps builds on the last and gives it more momentum, making it easier for a prospect to respond without feeling threatened?

And when we implemented this on the RocketMemory™  landing page, it looked like this: 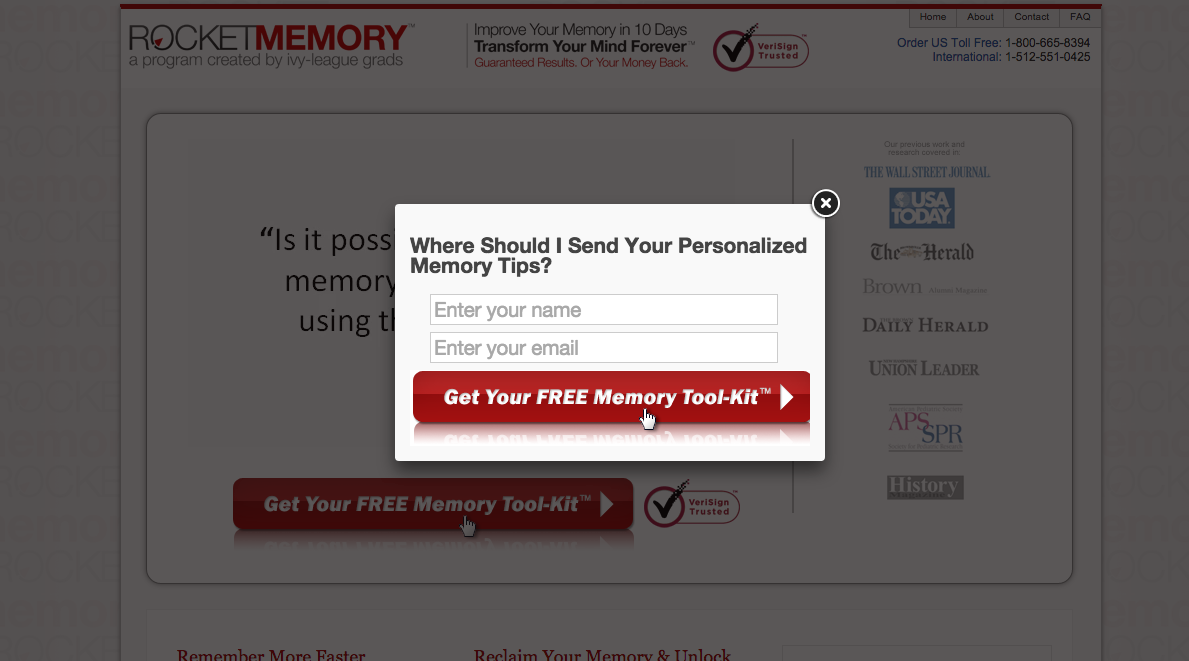 The results were incredible: 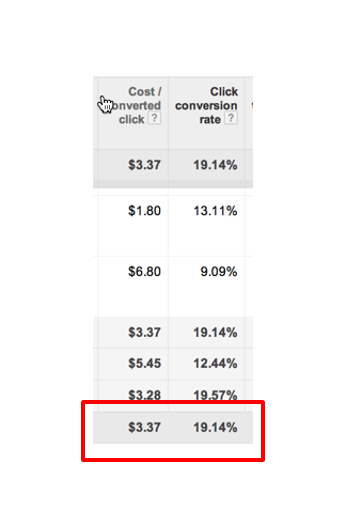 Simply by shifting from a traditional opt-in form to what I now call the “Micro-commitment Bucket Survey.”

Since then, I’ve implemented this Survey Funnel formula in 23 markets, generating 52,000 leads per day for my own businesses and for my 7, 8, and 9 figure clients.

In every market we implemented this in, we saw a sharp increase in opt-ins and conversion rate. When it comes to CRO, this is the closest thing you can get to a “surefire” winner, if you do it right.

Now, this idea of decision-making momentum isn’t new. It’s the reason behind a tripwire offer, or breaking up a sales page into multiple pages. Each small decision builds a momentum towards a bigger action.

But I’ve refined this process and added the elements of self-discovery and customization, so when they take the quiz and answer the questions, we are able to deliver a customized message and solution based on their response.

This gives people the feeling that you can read their mind, and understand their biggest problem, which is an incredibly powerful marketing tool.

This is all part of the formula that I reveal in detail in my #1 National Best-Selling book, Ask. The book describes the 4 surveys that I use, each with a different purpose, and it also describes the amazing results this process has had.

If you’d like to learn more about the Ask formula, you can click here to get a free copy (just pay $4.95 shipping and handling.)

By the way, when you click on the link above, pay attention to how we’re using the Bucket Survey Question in a slightly different context. It’s worth signing up for your free copy just to see the process of segmentation that happens after.

If you’re looking to improve your opt-in rate, and your overall conversion rate, you should consider implementing a survey on your landing page, and using the idea of Micro-Commitments to sidestep the “fight or flight” response. And if you do, please let me know how it works for you!