This is one of the reasons Mark Twain liked to say,

“There are three kinds of lies: lies, damned lies, and statistics.”

Failure to understand how your analytics program is attributing conversions can lead you to make some very bad marketing decisions.

I’ll show you what I mean in a second.

It’s best to illustrate this through example.

Let’s imagine that Rick is considering the purchase of new basketball shoes,

Interaction 1 – Rick Googles the term ‘buy basketball shoes’ and visits yourawesomeshoes.com.  Rick browses the website and then exits the site.

Interaction 2 – Rick notices an article on Facebook by yourawesomeshoes.com called “How Lebron James Picks His Basketball Shoes”  He clicks on the link and reads the article.  He then clicks on a link to look at the price of the shoes, the Nike Lebron James 9.   Rick exits the website, too expensive at $299 he says to himself.

Interaction 3 – Rick is back on Google searching around for shoes — he just got his paycheck.  This time he types in ‘best cheap basketball shoes’ into Google.   Along the right side of the search result, a Google ad from yourawesomeshoes.com reads, “Save up to 75% on basketball shoes.”  Rick clicks and buys.

In this scenario, Pay-Per-Click from Google AdWords will receive 100% of the credit for the conversion.

The Google Analytics Last Attribution model looks like this,

The only exception to Last Interaction Attribution in Google Analytics is if the last visit was a Direct visit.

If, during interaction 3 of our example, Rick were to bookmark a page on yourawesomeshoes.com and return a day later via that bookmark (a Direct visit) the conversion would still be 100% attributed to Pay-Per-Click.

This makes sense as there is very little action we can take by learning that a conversion was a result of Direct traffic.

It would be attributed by Google Analytics in this way,

The problem with last interaction attribution

Assuming you don’t have $150,000 a year to shell out for Google Analytics Premium, Last Interaction is, for the moment, the only attribution model available in the free version of Google Analytics.

In other words, beggars can’t be choosers.

But be careful.  If you blindly trust your conversion reports — you could make some very bad decisions.

To understand what you may be missing, let’s take a look at some other attribution models.

First Interaction – 100% of credit is given to the first interaction.  In our example, 100% of the credit would be given to Organic Search or SEO.

Linear – Equal credit is given across all interactions.  SEO, Facebook and Google AdWords would receive equal credit in our example.

Time Decay – More credit is given to more recent events.  In our example the impact of SEO would be reduced while Google AdWords would be given more impact.

Position Based – Often used to give equal credit to first and last interactions and less credit to intermediate interactions.  In our case Facebook would be given less impact as it was just an intermediary step — it neither stimulated nor closed the sale.

Google Analytics doesn’t leave us completely in the dark regarding the numerous channels that can contribute to a conversion.

Google Analytics has an entire section called Multi-Channel Funnels that gets us closer to understanding how all of our digital marketing is working together. 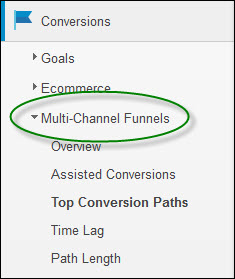 There are a number of reports inside the Multi-Channel Funnels tab but none more important than the Top Conversion Paths report.

The Top Conversion Paths report might be the most important report you’ve ever looked at.  It might save you from making a disastrous mistake.

The Top Conversion Paths report does a great job of visualizing the channels that contribute to a conversion.

In Example 1, we take a look at the top five referral paths for a client of mine.

What can be gleaned from this information?

Here’s what I take away:  SEO is pretty darn important to this company.  Organic search had a hand in roughly of 2,900 of these 3,800 conversions.

In a Last Interaction attribution model, Organic Search gets zero credit for these nearly 1,500 conversions.

If you didn’t look at the Top Conversion Paths report above you would be likely to fire your SEO guy and double down on social media.

But Multi-Channel Funnels show you that your SEO is doing the bulk of its work at the top of the funnel.

The question I would be asking about the data above would be, “What keywords are doing the best job of driving these early interactions that eventually lead to sales?”  Effort could be concentrated on increasing rankings on these phrases, finding and ranking for similar phrases and including these phrases in paid search.

Firing the SEO guy would be a huge mistake in this case.

Actually, it’s far from perfect.  But Google seems to be moving closer to allowing users of the Free Google Analytics tool to reorganize their data based on other attribution models.

What are your thoughts on how Google Analytics attributes goal conversions?  What are you seeing with your data?  What advice or questions do you have about goal attribution?