Blog » What is Domain Authority?

What is Domain Authority?

A 1-100 score predicting how well a site will rank in major search engines.

Domain Authority is a measure of how well a website is likely to perform in search engine results. It’s a search engine ranking score developed by Moz to give an overview of likely site performance. After Google deprecated and then stopped publishing PageRank, DA became one of the go-to replacements.

Where Do I Find Domain Rank? 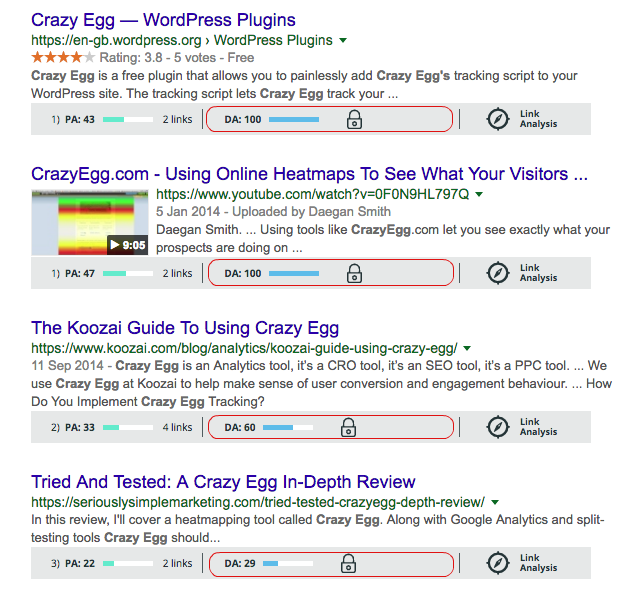 How Does Domain Authority Work?

DA is a good quick way to tell if a website is likely to rank well.

Notice, I said ‘likely.’ Google doesn’t rank by site, it ranks by pages. And as Danny Sullivan says at Search Engine Land: Google ‘has no single “authority” metric.’ Google uses a ‘bucket of signals,’ Sullivan says. Similarly, Moz uses its own collection of metrics to arrive at a site’s DA – over 40 of them.

These include MozRank, MozTrust and other Moz-proprietary factors. It’s a complex algorithm, though as SEOBlog’s Eric Sornoso notes, ‘not as complex as Google’s ranking itself.’ And it’s logarithmic. If you’ve never encountered a logarithmic scale before these graphics will help.

This image shows a logarithmic scale with the x-axis going up logarithmically: 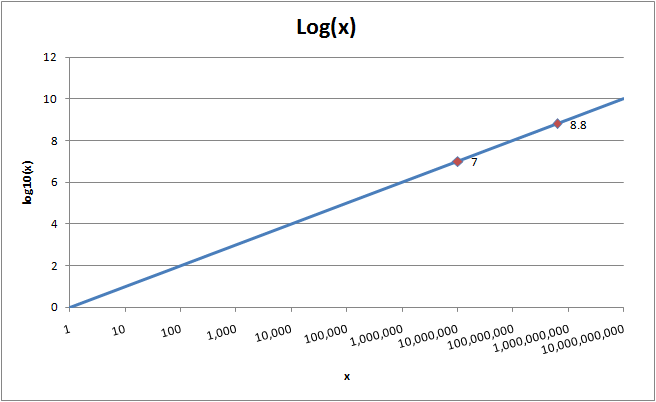 This one shows the same scale with the x-axis written in as normal numbers: 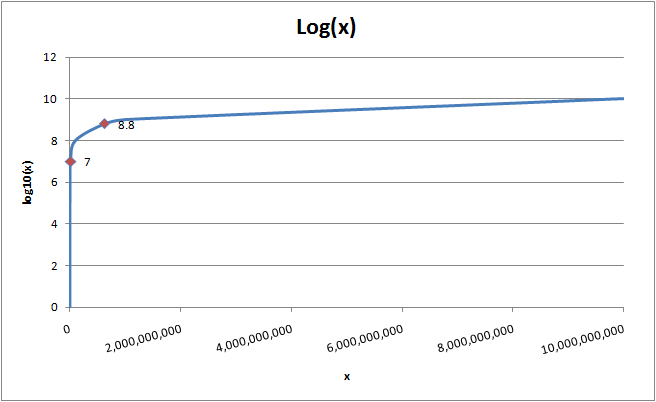 (These images show how the Richter scale works – Moz doesn’t release graphs of Domain Authority. But they should make it clear how fast a log scale rises and what one looks like in action.)

This means the higher your domain authority, the more difficult it is to improve it. There’s a much, much bigger difference between DA 50 and DA 60 than between DA 20 and DA 30.

What is DA Good For?

DA is good for giving you an at-a-glance picture of a domain’s value as a link. And it’s good for predicting likely search placing.

Does Domain Authority do a good job of predicting how well a site will rank?

Basically: yes. You can see ranking jump around DA in the graph above, but the trends track. Higher DA mostly = higher rank.

If you’re working to get links, DA can let you identify the value of a site in terms of its ‘quality’ and therefore the likely value of that link. Links from high authority sites are both better for SEO and more likely to translate into traffic, and DA reflects that.

That makes DA a fairly good metric for ordering link lists. DA is a better metric than Page Authority because you’re often hunting links from pages that are new or don’t exist yet. You can’t get Page Authority data on a guest post you’re just now pitching, for instance. But you can get Domain Authority data on the site as a whole.

Domain Authority also helps you to know how a site will probably place in search, though of course, different pages will place differently and if you want to get into that, you’ll want Page Authority, not Domain Authority.

What DA Isn’t So Great At…

…is working with subdomains. DA works with root domains only. So it can’t tell the difference between someone’s personal Blogspot blog and the blogspot.com domain, for instance, which can lead to strange results. However, DA remains a fairly reliable predictor of search result placement. 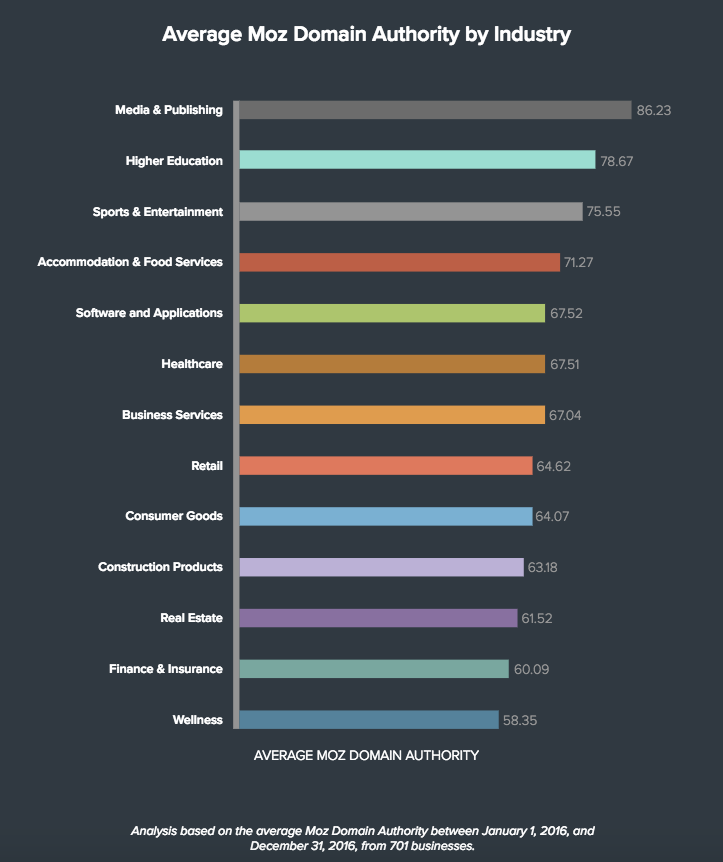 Moz cautions that DA isn’t an absolute metric. It doesn’t tell you how many links a website has, it tells you how likely that site is to outperform other sites. And it’s been designed to be difficult to influence directly because it’s intended as an overview of a site’s competitiveness, rather than a metric that can be altered directly.

To put it another way: A good DA is one that’s higher than your competitors’ but otherwise, it’s impossible to say.

Why do DAs Sometimes Rise and Fall?

If you didn’t lose any backlinks, but your DA fell, the reason might be that other sites got more backlinks. Moz can’t assign a DA of 105 to highly successful sites like Google or Wikipedia, so as the web grows, they leave 100 as the ceiling and ratchet everyone else down.

DAs can also rise without you knowing why, at least until you look under the hood. Domain Authority changes when the general landscape of your industry and the wider web changes, but also when other sites’ direct relationships with your site change. So if a high-authority site is sending you referral traffic, for instance, that can increase your Domain Authority. Check your full Moz report and cross-check against a tool like Majestic to get the full picture. 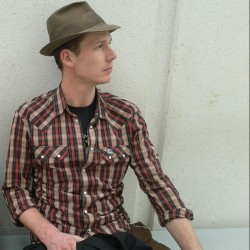 Richard Bayston
Richard Bayston creates copy and content at RBCopywriting.com, mostly about tech, digital marketing and content strategy. When he’s not doing that, he’s arguing amicably with his wife and Googling the answers. 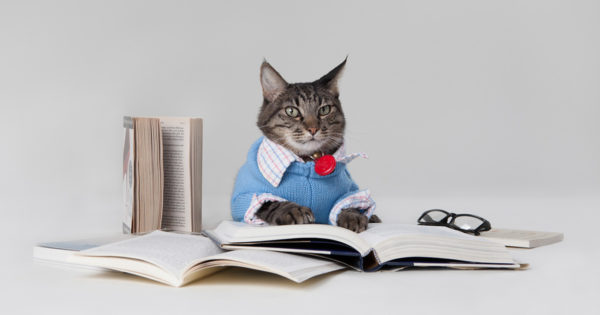 How to Get Quality Backlinks for SEO: The 6 Smart Ways

Building backlinks is still the most effective way to increase SEO rankings and traffic. But you have to be cautious with how to build quality backli

14 Ways To Improve Your Search Ranking With Video

Are you disappointed with your company’s search ranking? Have you tried a video strategy yet? Nobody can deny that video is the king of conte