In February 2004, Facebook was a small and unknown website, used only by Harvard students. By summer, they had expanded to other Ivy Leagues, but they were still pretty small.

Typically, VCs don’t invest in companies that are so small and have no idea how they’re going to make money. Watch Shark Tank or Dragon’s Den to see how brutal they can be on budding entrepreneurs who think they have got a million-dollar idea. For all purposes, Facebook was still an idea during the summer of 2004.

If you’ve seen the movie “The Social Network,” you know what happens next. In walks successful entrepreneur Sean Parker. He uses his clout to set up a meeting with billionaire investor Peter Thiel, who then invests in the fledgling company.

At a whopping valuation of 5 million dollars!

That’s the power of social proof. And this power can be replicated on your site to increase your conversion rates. Let’s see how. 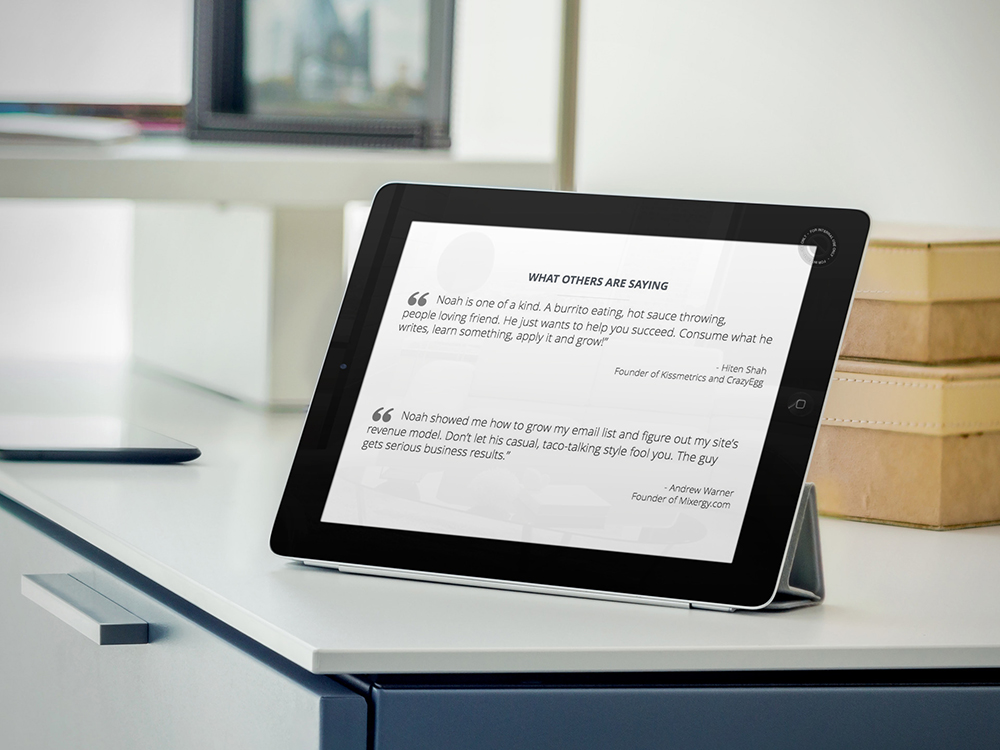 The Crazy Egg homepage just has two elements. The first is the ‘free heatmap’ URL box, which brings visitors into their free trial. The second is a block of customer logos.

Multi-nationals and household names like Intel and Yahoo are just a few of the 200,000 businesses using Crazy Egg. These companies are very careful about the software they use so the fact that they use Crazy Egg must mean something.

If you have clients or customers that are well-known in your industry, displaying their logos on your website will send a signal to visitors that you are worth investing in.

One of the changes Voices.com made to their homepage to increase conversion rates by over 400% was to add a row of customer logos. The social proof went a long way to impressing visitors and converting them into customers.

Logos also work if you have impressive partners. They need not use your product or service, but the fact that they work with you lends credibility to your business.

Cook Travel, a corporate travel agency, partnered with reliable airlines like Virgin and Air France to negotiate bulk discounts on tickets. They used their logos on their site and increased their conversion rates by 48%.

Product reviews are integral to ecommerce sales. It’s no secret that adding reviews to your product pages increases conversion rates. In fact, a study conducted by Forrester and Jupiter Research found that 77% of customers read reviews before they purchased something online.

In an experiment conducted on Figleaves.com, it was found that products that had reviews had a 12.5% higher conversion rate than those that didn’t. The more reviews a product had the higher the conversion rates were, with an increase of 83.85% for 20+ reviews.

Authentic reviews signal to consumers that others have used your product and that it has worked for them. Showing reviews from real people, and including negative reviews, builds trust as well.

By merely adding a reviews widget to their product pages, Express Watches increased sales by 58.29%. On their site they made claims that their watches were authentic and came with a warranty, but consumers were still not convinced. Once they saw reviews by other customers, it became clear to them that this was the real deal. 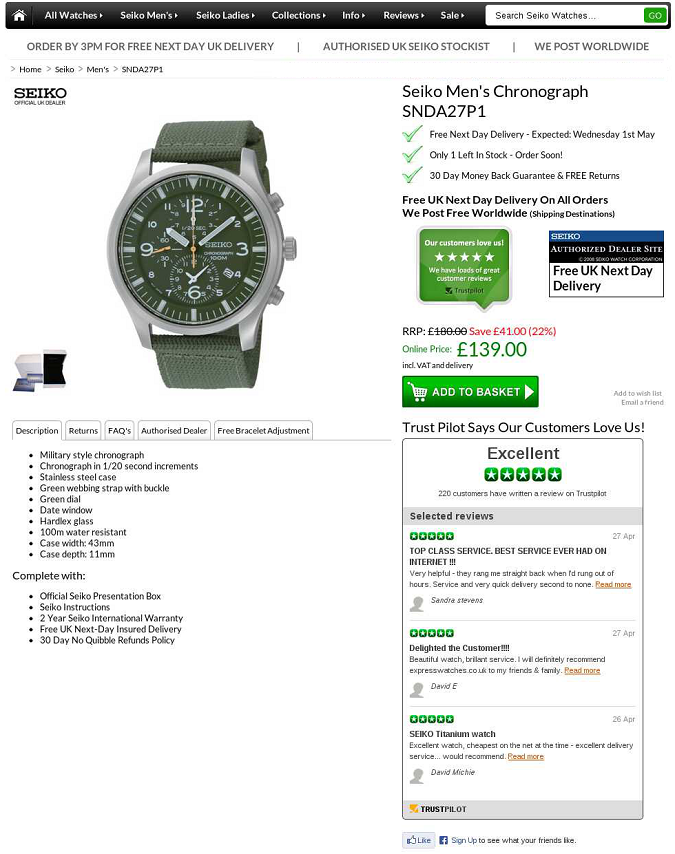 A testimonial is almost like a recommendation and works best if an authority figure provides it. Peter Thiel invested in the fledgling Facebook because of recommendations from Reid Hoffman and Sean Parker.

As with logos, the more well known the person giving the testimonial, the better it will perform. He or she needs to be an influential person in your industry to impress your audience.

For example, Noah Kagan targets entrepreneurs on his blog OkDork. He got Hiten Shah and Andrew Warner, two successful entrepreneurs, to write testimonials for him. 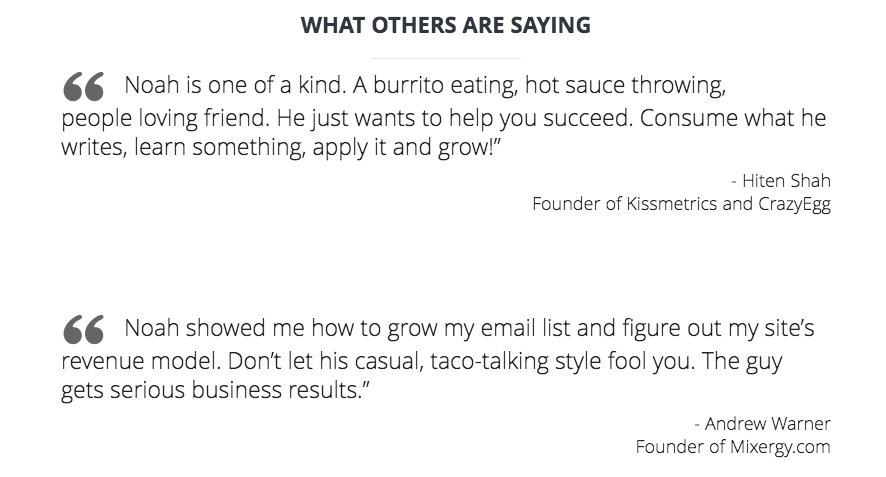 The important part about these testimonials is that they aren’t generic. They don’t just use empty statements like, “Noah is the best!” These can actually do more harm than good. Instead, they are tailored towards Noah’s audience and explain why you should join his email list.

Now you may not have industry leaders using your product or service but that doesn’t mean you can’t try using testimonials on your site. Ask your existing customers to say something about you and test how it works on your site.

WikiJob used three simple quotes from customers on their homepage and saw an increase in conversion rates of 34%. The testimonials were very bare bones and didn’t even have names attached to them. It might backfire in some cases, but luckily for them it worked. 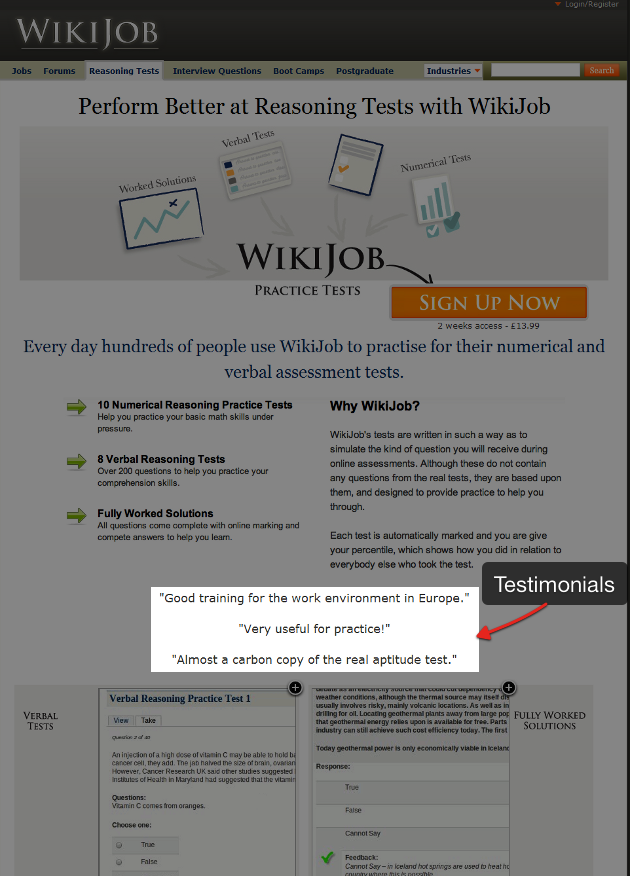 Testimonials can be used on e-commerce sites too. Onnit sells sports nutrition, so their customers are athletes and sport people. They got some big names in the industry, including well-know trainers, sports champions and doctors, to use their products and give a testimonial. Instead of using reviews on their product pages, they use these testimonials. 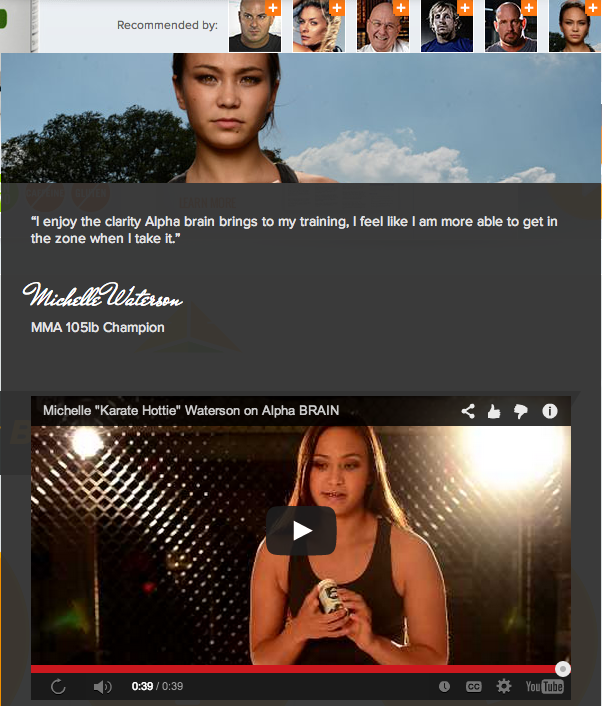 You’ll notice they also have a short video testimonial. This makes the testimonial even more believable than just a name. You might be able to fake a quote, but an actual video with the athlete holding your product is hard to fake.

Case studies are extremely powerful, especially when you make claims about how your product or service can help people.

Have a look at Neil Patel’s consulting service. Neil says that his services will make you more money. Work with him and you’ll end up richer. It sounds like an outrageous claim, so Neil backs it up with solid evidence in the form of case studies. 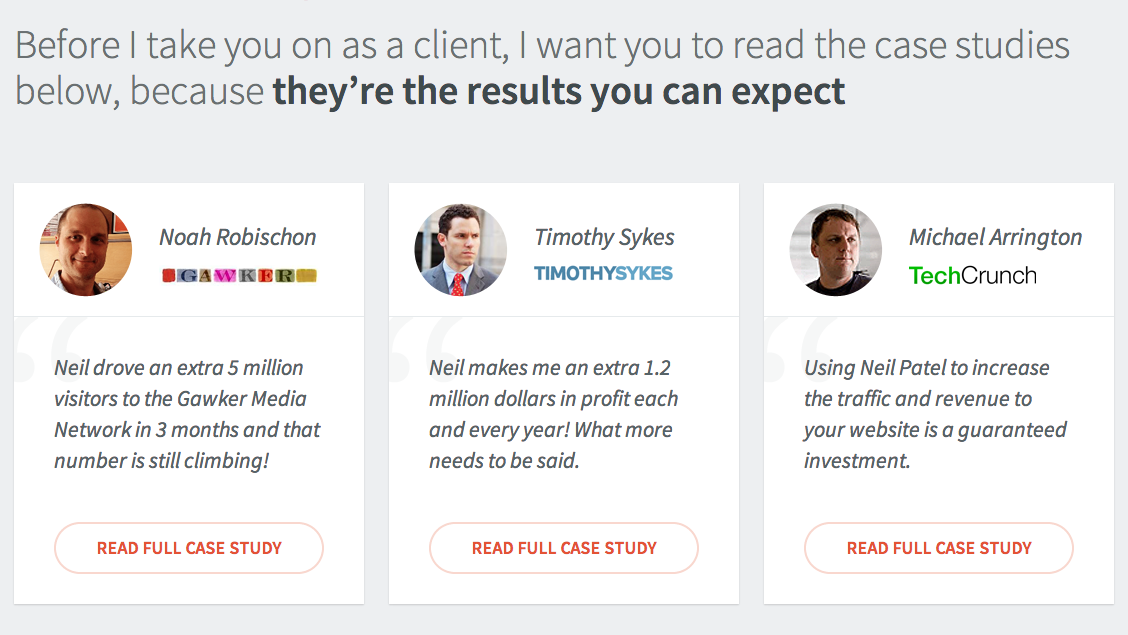 Again, Neil has worked with some big names in the industry so it’s even more impressive that he has helped them make more money. The underlying message here is that even profitable companies go to him for help, and they get tangible results. That’s social proof you can’t ignore.

When creating case studies, make sure to include actual data. If your product helps companies increase conversion rates, show what their rates were before they used your product, and what the rates became after. Include a problem statement, how your product solved the problem, and then the final results.

Try to publish a variety of case studies, each one highlighting a different benefit of your product or service. When potential customers come to your site, they’ll look for the one that most resembles their problems.

Fitbit creates case studies in the form of success stories. Each story shows how a customer used their fitness tracking devices to lose weight and become more active. The stories are inspirational and they in turn convince other consumers to buy the product.

The number of fans, followers and mentions you have on social media is proof of your popularity. In some cases, strength in numbers beats out other forms of influence when it comes to conversion rates.

Betfair ran tests on their website to see how different forms of influence affected their conversion rates. Their regular landing page, the control, had a call to download their mobile app. 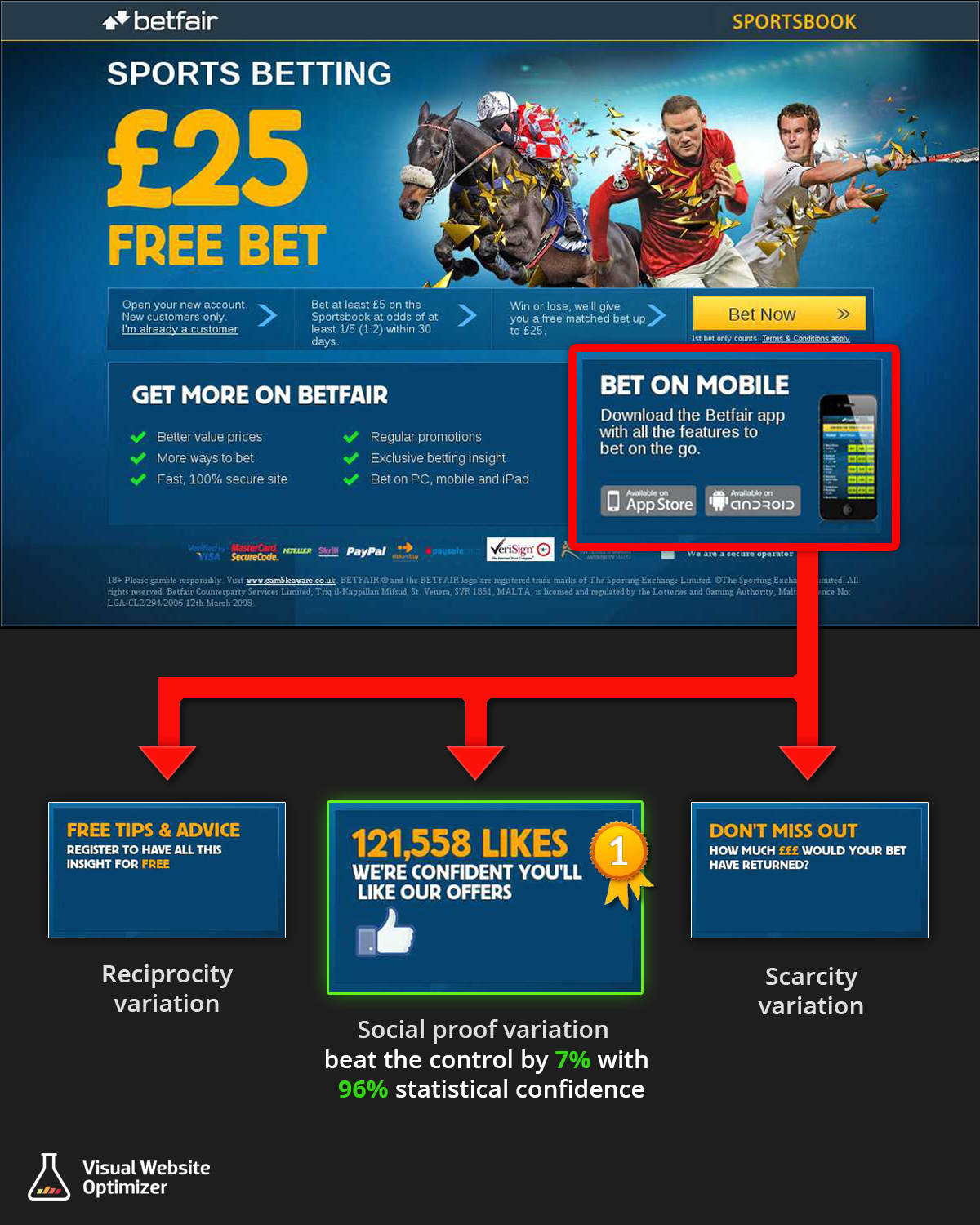 The variations were reciprocity, scarcity, and social proof. All three variations did better than the control, but the social proof variation performed the best with a conversion rate increase of 7%.

Share buttons and social media boxes are other ways to show off your fan following. If you look to the left of this post you’ll see a floating bar with share numbers. To the right you’ll see a section called ‘Stay Connected’ where it displays the number of likes this blog has on Facebook.

On the flip side, having very low social media numbers can actually hurt you. You don’t want your Facebook fan box telling visitors that only one person likes your business and that it’s your mom. People might assume that you’re too new and too risky, or that your product doesn’t work.

Much like high-profile testimonials and customer logos, getting covered by media adds social proof by implying that they vouch or you. It’s why so many startups pitch themselves to TechCrunch. One mention of their app and they get a huge traffic boost.

Here’s another example from Neil’s website. He has pulled quotes from news mentions on sites like Entrepreneur Magazine, Forbes and Wall Street Journal. These are universally read publications and trusted sources for business news.

You may not be covered in the press like Neil, but even blog mentions can help. If you’ve landed guest posts on a popular blog, or even been mentioned by them, you can try displaying their logos on your site.

Show Us The Proof

Get it? You show customers the social proof and they’ll show you the money. Try out some of the above methods and see if they improve your conversion rates. Then come back here and post the results in the comments!

Are you using other forms of social proof on your website?