On the surface, Google doesn’t appear to have a particularly close relationship with split testing.

They offer a split testing feature built into Google Analytics (that many marketers are oblivious to), but it’s not the fanciest thing in the world. It allows you to direct visitors to two different variations and measure a range of objectives but doesn’t, for example, allow you to create a truly custom split—you can only direct a preset percentage of traffic to each variation.

It relies mainly on using separate landing pages, which you might find fiddly if your URL structure is already a bit of a tangled web and requires taking the possibility of being penalized for duplicate content into account if you’re only making minor changes.

Beyond that, Google hasn’t taken much of a foray into the realm of A/B testing. Given the current popularity of split testing, offering only a limited tool to capture some of the market might seem short-sighted. But is Google really ignoring the CRO space or have they just been biding their time?

To answer that question, I want to look at a recent change to AdWords that might signify a change in Google’s attitude towards split testing.

The problem with PPC advertising and split testing

When it comes to PPC advertising, lots of small business owners ‘set it and forget it.’

Of course, they put some work into figuring out keywords they want to bid on, setting an appropriate maximum bid and so on. But, once all that’s done, it’s not unusual for business owners to just leave AdWords running… maybe with an occasional check on the budget from time to time.

One result of this is that ads that have been in place for a while have a wealth of information (tracking history, quality scores, etc.) associated with them. And, until recently, any attempt to adjust something like tracking criteria has resulted in that information being lost.

Even worse, changes used to result in ads being sent back to Google to be approved again. This is clunky and inconvenient, and it has been a sore spot for AdWords users for years!

Understandably, for many users, it has also resulted in an unwillingness to tinker with long-running PPC ads or even let their PPC account managers make adjustments to them… something no doubt hugely frustrating for account management execs!

Here’s the good news: All of this is changing.

What used to be known as the ‘Destination URL’ is to be split into two parts:

Soon, if it hasn’t done so in your account already, the option to use a Destination URL will disappear and only Final URL will remain.

In itself, this isn’t a huge change. It’s unlikely that anyone was ever frustrated by being unable to adjust their tracking information on a daily basis.

However, it represents a nice move on Google’s part, in that it allows advertisers to adjust successful ads without losing all of the information associated with them.

In that respect, this sounds like one step of a program to encourage users to experiment more with their PPC ads.

And that can only be a good thing for Google—once advertisers have figured out which ads are getting the most clicks and have the highest ROI, they’ll be more willing to pump money into those ads. In turn, that means more money for Google.

Removing the need for ads to be reapproved also demonstrates some willingness to trust advertisers more.

True, it’s a baby step, and it’s not one that’s associated with any dangerous consequences on Google’s end. Still, more freedom promotes creativity and is likely to keep advertisers sweet enough to stop them looking somewhere else.

So what does this have to do with split testing?

On the surface, not much. However, I believe the move demonstrates Google’s understanding that their customers increasingly value the ability to make swift changes, run tests, change tracking information and so on.

I think it’s one step towards an approach that embraces split testing more than they currently do.

While many marketers have embraced CRO, to the extent that ‘growth hacker’ has become a legitimate job title, it’s still fairly common to hand off all aspects of PPC management to an account manager or set up a few basic campaigns and just leave them running.

If that’s true for you, improvements to AdWords (like this one) that make it easier to tweak ads without the need to send them back for review might be just the nudge you need to get your sleeves rolled up  and start split testing your PPC ads with the same enthusiasm that you do your website.

The future of Google and split testing

More and more emphasis is being placed on conversion rate optimization, particularly through A/B testing and growth hacking in both startups and larger organizations.

Compared to tools like Optimizely and Visual Web Optimiser, Google’s internal split testing tool in Analytics looks extremely basic… something that VWO isn’t afraid to point out on their Free Trial page: 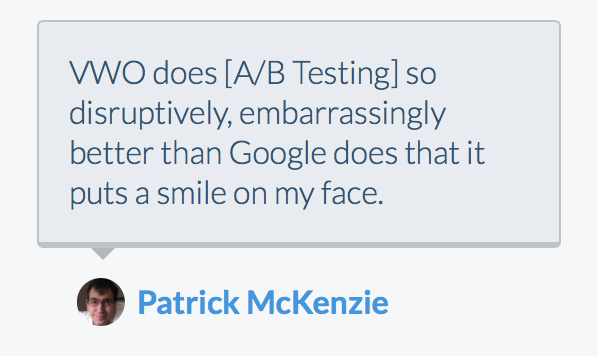 While it is possible to integrate Google Analytics with Optimizely, and thus use metrics as experiment goals, a Google-made tool that could bypass the need to set up integrations or fiddle around with APIs would definitely appeal to marketers.

Although the changes detailed above don’t have a direct impact on split testing per se, they’re important because the retention of data gathered about individual ads has been prioritized. This doesn’t mean anything for certain, but it means that Google is acting in way that shows they accept the importance of data-driven marketing and testing.

With apps like Gmail, Docs, and Chrome already in place and competing very effectively in their respective spaces, it’s very likely that Google is either building or planning to acquire a more comprehensive split testing tool in the future. (I need to have that sentence in writing so I can say “called it!” when the news does leak.)

With other recent acquisitions relating to everything from home automation to artificial intelligence, is it really likely that CRO is at the top of Google’s list? Given that so many of their other tools are designed for enterprise use, it would make sense for them to get a couple of quick wins with apps relating to split testing and email marketing, then focus on their bigger ambitions in the long run.

Give it a couple of years, and I think we’ll see something like Google Split emerge. Let’s just hope they can come up with a better name than that.

A possible mascot? Um. Maybe not. 😉

What do you think? Let us know in the comments if you think Google will be venturing further into the split testing space.