Have you ever wondered if you’re a CRO expert?

There aren’t many out there. Content marketers aplenty, coders everywhere, SEOs in abundance, and social media gurus on every corner, but conversion rate optimizers? They’re a rare breed.

To find out if you fit the profile of an “expert,” see if these things apply to you.

And if they don’t, it’s not too late to rise in the ranks. You won’t merely discover if you’re a CRO expert. You’ll also discover how to become one.

1. You Realize That Conversion Optimization Starts With Learning About Your Target Audience

If you don’t learn about your target audience, you’ll never know who it is you’re optimizing for.

You’re screwed from the start.

Learn your audience. Then run your tests. Then optimize. In that order.

2. You Create A Testing Plan And Strategy Before You Start Running Tests

Many rookie optimizers know that they’re supposed to run split tests. That’s what optimizers do, right?

So they start testing. But they do so without a clear plan or strategy.

That’s a dangerous place to be. Testing without a clear direction or plan is like getting dressed without knowing whether you plan to work out or attend a black tie dinner.

Create a strategy and then test.

3. You Never Change Anything On A Website Without First Running A Test

Here’s where the seasoned pros peel off from the gaggle of young upstarts.

Young upstarts are itching to optimize something… anything! So what do they do? They do the following:

They rely on their gut, make some “optimizations,” and wait for the conversions to start pouring in.

You — you wisened, war-beaten veteran, you — you know a thing or three about conversion optimization. You never make a single change without running a test.

Why? Because see the point below.

4. You Have Discovered The Danger Of Relying On Your Opinions, Feelings, Or Experience

You probably have a lot of experience. You’ve learned some valuable lessons. You’ve been surprised by your overturned hypotheses.

So you know conversion optimization pretty well. You have a good sense of what’s going to work and what’s not going to work.

Wouldn’t it be okay to simply make a few tweaks here and there? Even without a test?

If you’re an expert, you will respond with an unequivocal “no.”

Sometimes, the most dangerous and devastating changes that you can make on a website are ones that are predicated on your hunch, your opinion, or your feelings, or even past experience.

5. You Have Developed A Conversion Optimization Heuristic, Even If You Didn’t’ Know It Was Called That

A heuristic is a shortcut, basically — a method of optimizing a website without starting from the ground up.

As a CRO expert, you’ve developed your own heuristic for dealing with the optimization process.

I like the examples that Jeremy Smith provides on the importance of heuristics for conversion optimization.

“How many steps should my checkout process be?” Well the rule of thumb is to keep it at three.

“Is ‘WTF?!” a good headline to use for this charity website?” Some people don’t like swearing, and WTF is an implicit swear word.

In each example above, you use a heuristic to solve a conversion question.

Obviously, you may want to test variations, but sometimes you’re going to be developing a site from the get-go along with designers, information architects, and developers.

In such cases, structuring the optimization process according to your heuristic is a smart move.

6. You Realize That The CTA Is The Most Powerful Weapon In The Hands Of A CRO

The CTA is where conversion optimization centers its atomic power.

Everything matters about the call to action.

If you want to improve a site’s conversion optimization, you’re probably going to make a beeline for those CTAs.

We conversion optimizers do copywriting even though it’s not a part of our job title.

Why? Because headlines matter in conversion optimization.

A few persuasive tweaks, a power word, and a tad of sizzle in that headline could be the difference between a conversion rate of 4% and 8%!

In doing so, we learn about copywriting. And we’re pretty good.

8. You View CRO As An Ongoing Process

If you think that someday, you’re going to finish the CRO process, then you’re still in newbie stage.

Theoretically, the maximum conversion rate you can get from a website is 100%. (I doubt you’ll ever reach that level.)

So if you’re not to 100% yet, then you still have your CRO work cut out for you.

9. You Hypothesize The Results Before Every Split Test That You Run

There are no useless tests. But, having said that, a test without a hypothesis is pretty close to useless.

In order to derive the greatest value from a test, you should form a hypothesis before you run that test.

Sometimes, the best tests are the ones in which your hypothesis was blown away.

10. You Read CRO Case Studies With Curiosity, But Not As “How To” Conversion Optimization Manuals

You know those websites and articles, don’t you?

How Business ABC Changed Its Button Color, and Conversion Rates Exploded by 8,000%!

But they don’t tell you what to do with your website. Just because Business ABC scored an 8,000% uptick in rates, doesn’t mean that you’re going to get the same benefit.

Be curious. Be eager to test. But don’t view case studies as how-to manuals.

11. You Learn Something From Every Test That You Run

Every test is a learning experience.

Does a test ever fail? Technically, yes. You may not have statistical validity, or you may have failed to run a baseline setting A/A test.

But did you learn? Yes.

Perhaps you learned how to run a better test, how to streamline the testing process or some other nugget of knowledge about testing.

And then there are the tests in which you really learn — knowledge about your users, your website functionality, and other conversion-boosting information.

You eat it for breakfast. Data is your love language.

13. You’re Not Scared Of Longform Landing Pages. At All 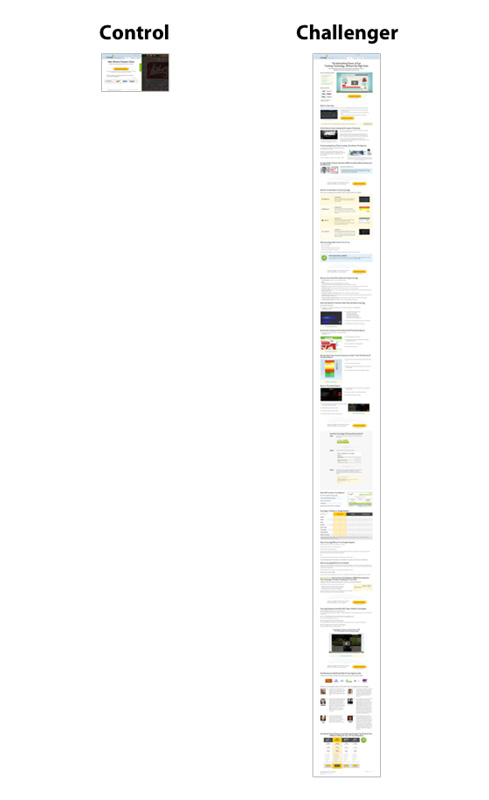 In one test, I had disproved the “best practice” of landing pages — that shorter is better.

My discovery shouldn’t be a huge surprise if you’ve hung out in the conversion community for a while. Here’s what Talia Wolf wrote about long-form landing pages: 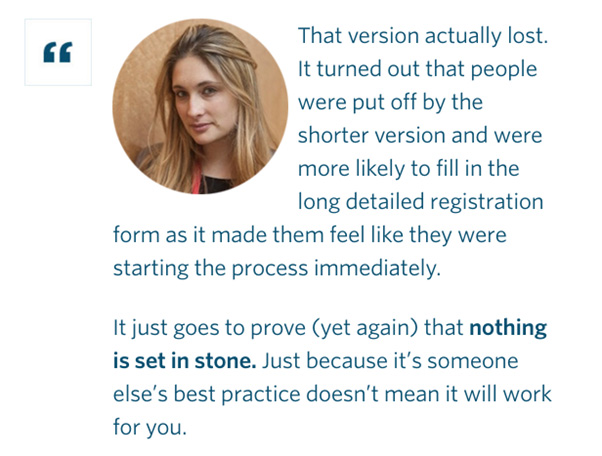 I like the way that Conversion Rate Experts summed up the discovery we made on Crazy Egg’s website:

Don’t believe nonsense “rules” about how “short pages sell better.” The Harry Potter series proved that you can get people to line up at midnight in bookstores to receive the next lengthy book, as long as it’s interesting. If you listen closely to your prospects and then make sure your website address what’s on their mind, you can achieve your own mini Harry Potter moment.

14. You Realize That CRO Isn’t Just About The Testing

You’re not just a CRO. You’re an all-round usability expert, and conversion optimization is where you choose to focus your skills.

15. You Can Sell CRO To Almost Anybody Inside Your Organization

You basically have to. CRO involves the buy-in and help of designers, developers, copywriters, and executives.

CRO is a group effort, and you are the leader of that group.

16. You Realize The Importance Of Customer Psychology

17. You’re Not Afraid To Break Some Rules, Break Some Hearts, And Slaughter Some Sacred Cows

Conversion rate optimization is about innovation. It is, after all, one of the favored tactics of growth hackers.

It’s a process of learning. Every day that goes by, you learn something new.

Are you an expert?

This isn’t a quiz, a test, or even a barometer of your knowledge.

But if there’s one lesson I want you to take from this article, it’s this:  Always be learning.

Ha! You thought I was going to say, “always be testing,” didn’t you?

In your opinion, what defines a CRO expert?