This is also the case for many other businesses.

For example, Andrew Hubbard generated $36,449 In revenue from an ad spend of $4,159. That’s almost a nine times increase from what that marketer spent to what they made.

You can even get more creative. Take ecommerce brand Wee Squeak for example. They are able to generate more than 600 emails spending only $90 on Facebook Ads, then they drip those emails into sales.

That’s probably why Facebook is able to generate $10.3 billion in revenue with $4.3 billion profit in just Q3 of 2017 (that’s only in three months time).

Wouldn’t it be nice if all Facebook Ad campaigns went just as well?

And if you’ve spent more than a few days using Facebook Ads to try and reach your audience, you know exactly what I’m talking about.

By all accounts, your campaign should work. The copy is compelling, the product is remarkable, and the audience is on point.

Sometimes, what you think is going to work doesn’t.

And if you aren’t able to quickly ditch campaigns that are hurting your business (and leverage ones that are helping), then you’ll lose money.

Fortunately, Facebook ad optimization rules let you do just that.

But first, what are they, exactly?

Facebook Ad Optimization Rules Explained (And Why You Need Them)

These rules can help you determine a number of pre-set commands that will maximize your ad spend when you need it most, or decrease it when an ad isn’t performing.

Facebook Ad optimization rules can help you achieve a higher campaign ROI, increase conversions, and lower advertising costs by controlling the duration of an ad based on its performance.

All you have to do is tell Facebook when to put an ad on pause, decrease the bid, or increase the bid based on factors like CPC, CPA, amount spent, or frequency.

The best part? You can set up rules in a matter of minutes for every ad campaign you’re running.

From there, you’ll see a page that looks something like this, where you can choose which ads you want to apply rules to, the actions you want to take, the conditions of each rule, and more. 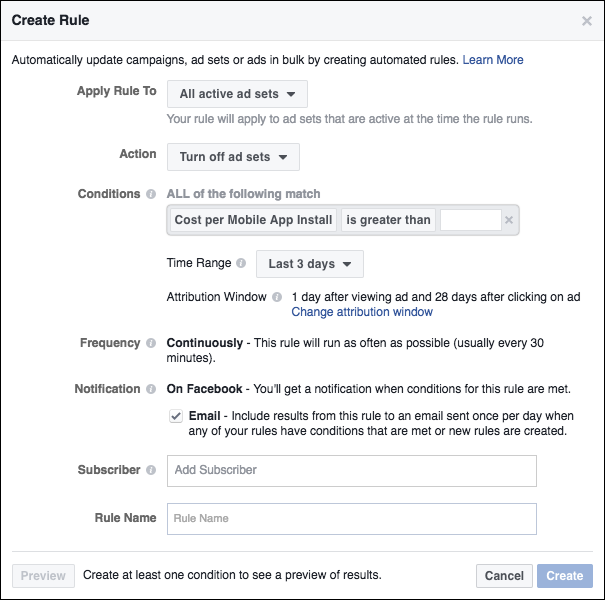 If you create a rule but apply it to the wrong ad, you could face a costly mistake. Take your time selecting the ad set or campaign that you want.

You can set rules for a number of different factors, including:

Once you have the rules you want set up and running, you’ll never have to worry about manually stopping ads once they reach a certain CPA or CPC.

On the other hand, you can automatically increase your bid if your CPA or CPC is low without ever having to think about it.

Here are a few reasons why you should never run a Facebook Ad campaign without using Facebook Ad optimization rules.

For starters, they allow you to control exactly how much money you spend on ads every day.

Control Exactly How Much You Spend On Ads Each Day

With daily spend caps that Facebook allows you to set and forget, you’ll never spend more than your budget allows.

And you can also stop spending if an ad campaign isn’t doing so hot before ever hitting your daily spend amount.

That way, you won’t waste any hard earned money on campaigns that are already looking grim.

On the flipside, you can also increase the cap for ad campaigns that are performing especially well so that you get the most bang for your buck.

For example, if you want to decrease your daily budget by $25 if your Cost Per Lead becomes greater than $5, you can create a rule to control every ad set you’re running. 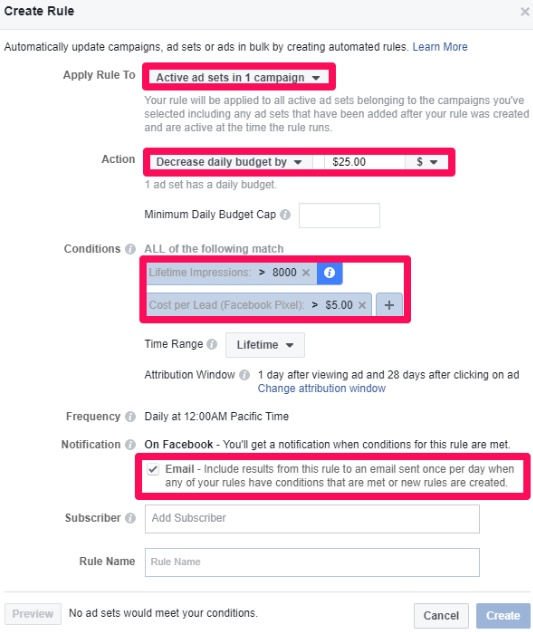 You can also select to receive daily email notifications with a breakdown of how your ads have been performing.

From here, you can even create an additional rule that turns the ad set off if a certain metric, like CPM or impressions, falls below a desired point.

That way, your campaigns will stop before you spend your budget on campaigns that aren’t performing well.

You can also edit and manage rules at any time as your goals change.

Edit and Manage Rules at Any Time As Your Goals Change

A maximum of 100 rules can be created on a Facebook ad account at any time, active or inactive.

Rules can be set up to activate when amounts are:

Find any rules that you’ve previously created within the Manage Rules section of your Ads Manager. You can turn them on or off here. 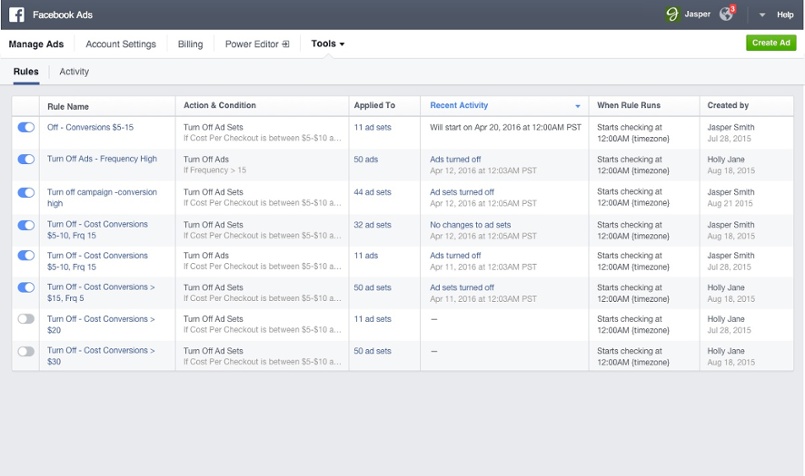 Here are the Facebook Ad optimization rules and tips that you need to make sure you’re running.

Now that you know why you need Facebook Ad optimization rules, here are the specific rules and tips that you can use to save yourself time and money.

First, you should automatically cap your frequency.

1. Automatically Cap Frequency So You Can Focus On Other Campaigns

It’s no secret that frequency is a leading indicator of performance.

Once frequency hits the desired point within a campaign and matches the reach you want with a valuable target audience, back off a bit to focus on an underperforming campaign instead.

You can cap frequency at your desired number of impressions per day, per week, or per month.

Next, be sure to target the right audiences for each campaign.

2. Use Core, Custom, and Lookalike Audiences to Target People Who Are Right For Your Business

When setting up any kind of ad set, you need to make sure you’re targeting the right kinds of people, or you’ll be wasting all of your ad spend on users who may not be interested in you.

Select your audience manually based on factors like age, gender, relationship status, or location with core audiences.

With core audiences, you can also reach people based on their interests or purchase behaviors.

By targeting users that you’re already connected with, you can drive sales and nurture more leads.

Finally, be sure to take advantage of lookalike audiences by using the Facebook pixel.

The longer that you have the Facebook pixel added to your site, the more data it can use for creating lookalike audiences or retargeting lists.

The pixel gathers user information from people who come to your site and are also currently signed in to their Facebook pages, which covers the majority of online shoppers.

That way, you’ll know exactly what action a customer took (and when they took it) after viewing your Facebook ad.

You can also reach that same customer again and again and deliver ads to people who are likely to perform the same actions.

The Facebook pixel also allows you to see exactly how customers are moving between several devices before they actually convert.

Find in-depth instructions for adding the Facebook pixel to your site here.

You should also be sharing the same dark post across multiple ad sets.

Every time you create an ad, you’re creating a “dark post” that is unpublished.

When you duplicate an ad set, you make more unpublished posts that are identical that you also have to manage comments for.

That’s unnecessary work that you shouldn’t worry about if you don’t have to. You should always promote the same post in multiple ad sets.

Publish your first ad in the Power Editor, and then visit the ad’s permalink. Then, copy the post ID.

From there, choose to “Use Existing Post” in your new ad set. Paste the ID of the existing post. 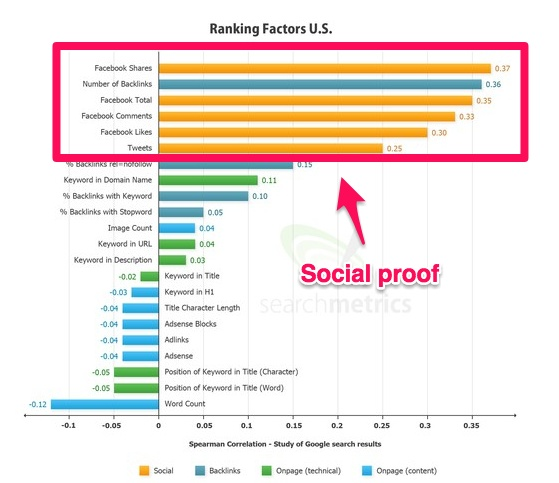 (You can also make sure that site load times are high to boost social proof, like referrals and reviews.)

Conversions are more important than cost, so never be afraid to increase bids when you need to.

For example, only increase your budget by a certain percentage if the CPC is under a chosen amount. Then, include another rule to lower it by that percentage if it’s over a certain amount.

You should combine several rules to work together in your favor when it comes to bids.

This allows you to leverage your ads for all they’re worth by increasing your budget early in the game and decreasing it as soon as performance takes a dip.

You should also choose to run ads on ad placements (and during times) that deliver the best results.

When you first create ads, it’s a good idea to try and run ads across every eligible placement possible.

But not every ad placement is going to work well for every kind of campaign.

That’s why you need to take a look back at the placements that have delivered best in the past. To do this, go to Facebook Ad Manager’s campaign view. 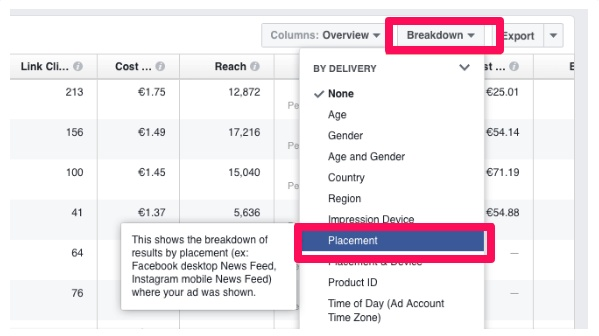 Here, you’ll be able to see your best and worst performing ad placements.

Then, you can make adjustments for the placements of your current and future campaigns.

You can view the same data for best and worst times of day to post. Under campaign view, select “Time of Day (Viewer’s Time Zone).” 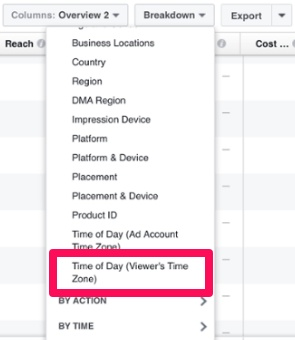 View which times of day yield the best results. Which times have the highest CTR and lowest cost per lead?

Try to post ads during these times by running all ads on a schedule. 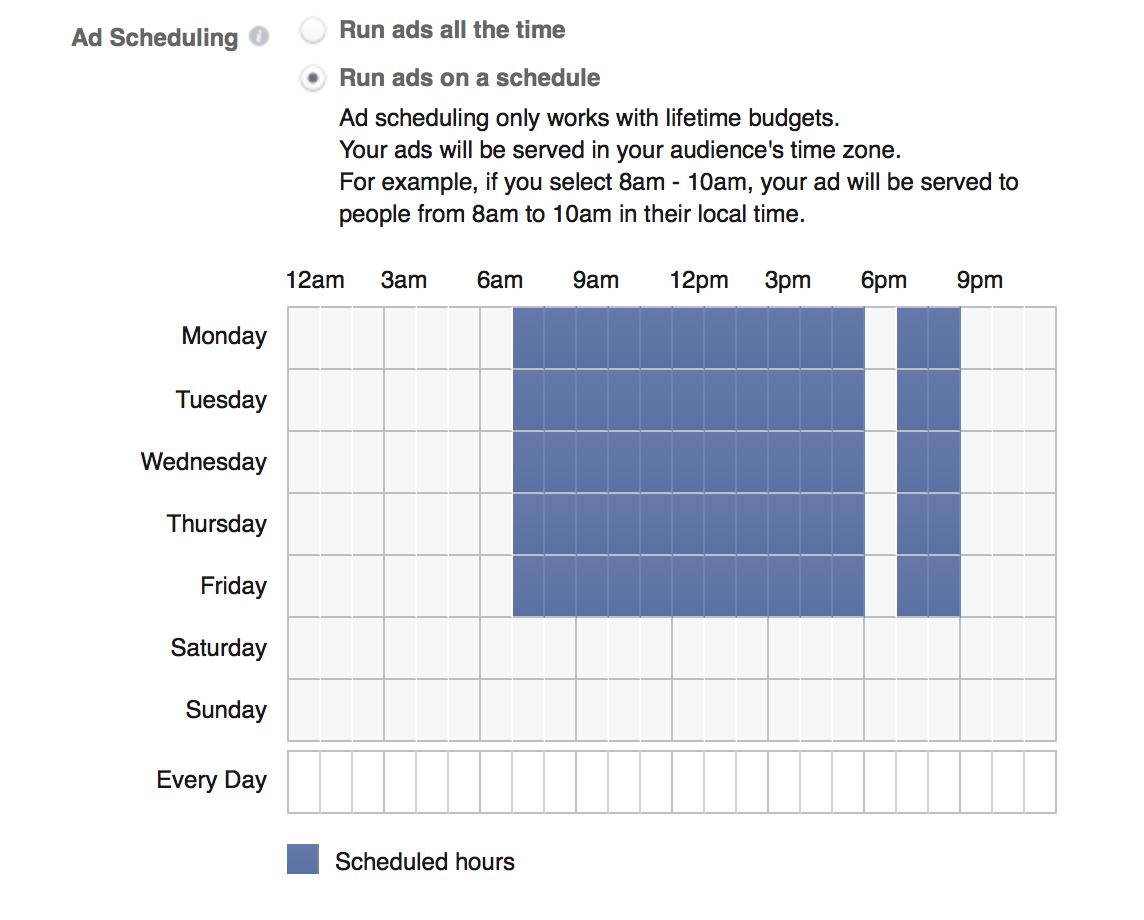 Facebook is the best place online to advertise. It accounts for over two-thirds of social network ad revenue share.

Facebook’s Ads Manager has every tool you could ever need to reach your desired audience and make a killing running ads online.

But you’ve got to discipline your ads to make them behave.

You need Facebook Ad optimization rules to make the most out of every ad campaign and avoid spending too much or too little on each ad set.

With Facebook Ad optimization rules, you can pause ads that just aren’t cutting it and leverage the power of successful ones, leading to more profit and fewer problems.

This allows you to control exactly how much you spend on ads each day. You can also edit and manage rules at any time as your budget changes.

There are a few Facebook Ad optimization rules and tips to steal for the best results.

First off, you need to automatically cap frequency so that you can focus on campaigns that could use a bit more attention.

Never run ads without adding the Facebook pixel to your site.

All of the ad optimization rules in the world don’t mean as much if you can’t track exactly how Facebook users are interacting with your site.

Share “dark posts” in multiple ad sets so that you can rack up a large amount of social proof on one post to boost rankings and SEO.

Increase bids for more exposure if your CPC is low and don’t forget to combine multiple rules on your campaigns if needed.

Run ads on a schedule so that you don’t have to manually update them at desired days and times.

Improve the reach and performance of your Facebook Ads with Optimization Rules now to save time, money, and your sanity.